A Five-Day Journey Through Japan

Kyushu, the third largest of Japan's five main islands, possesses postcard-worthy train stations, fantastic passenger trains, and idyllic escapes from daily life. Being prone to volcanic activity—which in turn fosters "onsen" hot springs—it only stands to reason to embark on a journey through this landscape to soak up some of its magic.

Yufuin No Mori, one of Japan's most gorgeous passenger trains, runs from Hakata in Kyushu's north to Beppu on its eastern coast. Of all the possible ways to board it, perhaps the most sensible consists of riding the Sakura Shinkansen toward it from Hiroshima. The name means "Cherry Blossom" in Japanese. The Sakura Shinkansen—while not being exotic—shines in the sense that its cleanliness and efficiency reflect the higher standard to which the Japanese train industry holds itself. Another perk for travelers, in regards to the Sakura Shinkansen and Yufuin No Mori, is that your Japan Rail Pass is valid on their routes.

Once in Hakata, you can transfer to the Yufuin No Mori, bound for the hot spring town of Yufuin. Gorgeous both inside and out, Yufuin No Mori's exterior mixes bold green-and-gold trim with panoramic windows facilitating fantastic views. Its interior flirts with a Meiji-esque feel—like the Japanese Victorian era—with abundant wood and chrome. And, the theme continues with tasteful consistency throughout the entire train. Tickets start as low as 1,230 yen for non-reserved seats, and amenities abound; there's a free-space lounge that resembles a section of a British pub, and a snack bar where one may claim a frame-worthy postcard. However, this train is most amazing where it is least expected; even its corridors would befit the Titanic. Having arrived at Yufuin Station—a snapshot of now bygone times—be sure to sample the region's pride, a hot-spring footbath awaits you on the platform, the epitome of service with a smile.

The town of Yufuin offers myriad fascinating strolls and culinary treats you can indulge in before slipping into the hot-spring baths of the hotel of your choice. Novelty businesses abound and an astonishing variety of souvenirs may be purchased on the main shopping streets. For fans of fast food, however, Yufuin Burger serves must-eat delicacies. Chef-and-founder Miyaji Ryuichi crafts each item by hand, right down to the tomato sauce—not ketchup—which adorns each of his burgers. Each beef patty is crafted from a mix of locally-sourced wagyu and prime Australian beef. The bacon omelet special is a masterpiece on par with the best burgers I've consumed and the chicken nuggets—while not a burger—seemed too delicious to be called "nuggets". Adding a slight spritz of lemon renders them even more Heaven-sent. And, even the homemade fries were scrumptious; the slightest coating of herbs and salt delivering a baked potato's charm.

Once stuffed with delicious local fare, one might feel prompted to walk off some calories, and there are few places more fitting for such a stroll than the town of Yufuin. More mystic than Mt. Fuji to some, and possibly more striking, Mount Yufu (Yufudake) towers over the town like a deity. And, a stroll around Lake Kinrin (something more like a large pond) somehow brings to mind the image of a European town. When it's time to wind down for the night, although there are many hotels in town, Shuhokan's rotemburo (outdoor bath) offers nearly peerless views. A soak in their baths and a slumber on one of their futon will see you born anew, recharged for more exploits.

The following day, and just twenty-four kilometers east, the seaside town of Beppu hosts fantastic curiosities. See a myriad of small hot spring pools known as "jigoku" hells (for their rising steam). One may visit different kinds; for example, one called "Blood" (Red) and one called "Sea" (Blue). Strictly for viewing (rather than bathing), these hot spring sources draw many tourists; possibly because of their photogenic nature. Each hell is equipped with its own respective gift shop, and Jikoku Meguri (a tour of the "hells") rates highly with tourists of all stripes. For those still craving a wee bit of a soak, free foot baths—and one hand bath—lie sprinkled around town.

Having enjoyed your trip to the hells, perhaps the sleekest way to leave is on the Sonic fast train that stops at Beppu Station. Cloaked in metallic blue befitting Sonic the Hedgehog, and sporting an "S" crest where one might place its nose, it would seem suited to the pages of manga or a high-speed video game. The lush interior boasts hints of European tastes—with the boldest of lush colors—while holding fast to the high-tech image of its outer shell; door-side lights and display cases display a fondness for sci-fi; the style of the door frames and security poles befit a world we've yet to enter. Each car of this train possesses different styles and colors of seats, depending on the price of one's ticket. However, none are short of all things comfortable and stylish. The train's website states that "(it uses a) tilting mechanism that reduces centrifugal forces in order to maintain both smoothness and speed when the train is going around a curve," and, indeed, your humble author felt less jostled than usual while taking photos in a moving train. And, the aforementioned Japan Rail Pass automatically covers your fare.

For the train aficionado, the onsen aficionado, or simply those craving a break from the usual, Kyushu offers something for all sorts. Its trains span the gamut of the effectively mock antique, to flirtations with the most futuristic sense of comfort. Hells await those who long to scan exotic vistas with their eyes, and healing baths with pristine views can soothe your body, spirit, and mind. Be sure to pack an open mind and prepare to be amazed; the journeys that await you might just leave you with new things to crave. 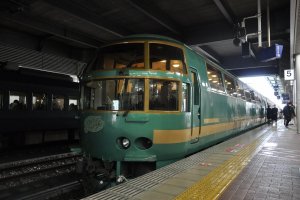 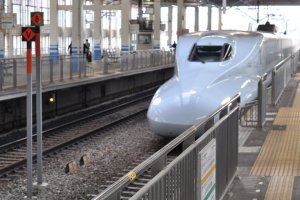 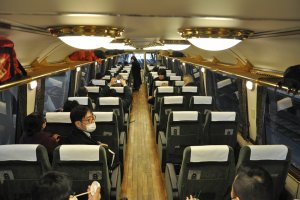 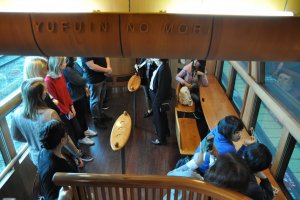 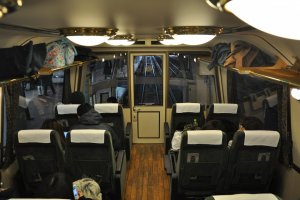 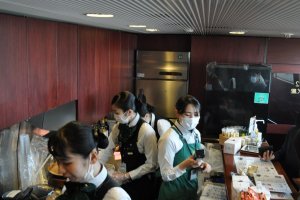 Elizabeth S 2 years ago
The trains are so stylish and comfortable. The trip looks like it satisfies a lot of interests, good for a a group or family trip.
Reply Show all 1 replies

Laurier Tiernan Author 2 years ago
Yes, on all the counts you mentioned! It would be a fantastic experience for any group; in whole or in part!
Reply

Kim 2 years ago
Would really like to revisit Oita! I've been to Beppu but would love to spend some time in Yufuin.
Reply Show all 1 replies

Laurier Tiernan Author 2 years ago
Yufuin is fantastic, and I highly recommend it!
Reply
4 comments in total