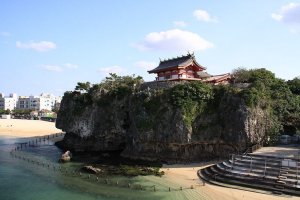 Naminoue Shrine is a Shinto shrine in Naha City, Okinawa Prefecture. It is located on a high cliff overlooking Naminoue Beach and the ocean. Any boat that enters and exits the trading base of Naha Port looks to the shrine on top of the high cliff and prays for a safe journey, the shrine has always been revered and people pray for a rich fish catch and a rich harvest as well.

Each new year the king himself visited the shrine on behalf of his people to pray for the peace and prosperity of the nation. The Naminoue Shrine is admired as the "" main shrine of the kingdom "". It was classified as a Kanpei-shousha (Shrine of National Significance) and Okinawa Sochinju (Shrine that protects all of Okinawa) in the Meiji era, but it was destroyed during the war.

After the war, the shrine office (Shamusho) and the main shrine (Honden) were rebuilt in 1953. The church (Haiden) followed a little later and was rebuilt in 1961. In 2006 the Naminoque Shrine was declared a Historic Heritage Site of the City of Naha.

From Naha Airport, it's a 10 minute monorail ride to Asahibashi Station, followed by a 15 minute walk.

Monorail passengers could alight at Kencho-mae station, and catch a bus (2, 5, 15, 45) from Paletter-kumoji-mae to Nishinjo stop, leaving a 3 minute walk to the shrine.

Naminoue Beach is the perfect place in Naha, Okinawa, when you want to refresh yourself after a long day of sightseeing. The close-by..

Why not review more places in Okinawa?

I stayed at the Hotel Grantia Naha, being part of the group Route Inn Hotels, a modern hotel not far from Naha port. It is abo..

Nahana is one of the best value 4 star hotels in Naha, Okinawa, Japan. Why not drop in at the Kotoran spa? The silky germanium bath..

A great steak house in Naha that won't be packed with tourists.

Bright colors and strong flavours assault your senses in this friendly eatery. The menu is perfect for a group to share a variety..

Better Girl, a breakfast cafe at the heart of Naha City in Okinawa that aspires to do the sandwich right. They're serious enough..

Shuri Castle was built in the 14th century and was the palace of the Ryukyu Kingdom. It was neglected for almost 400 years and suffered great damage during..

Fukushuen Garden: Take a side trip to Fuzhou China right in Naha Okinawa