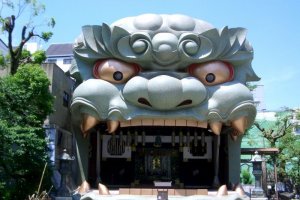 Namba Yasaka Shrine is a unique and standout destination among Osaka’s sacred spots. Located in the Namba District, Namba Yasaka is famous for its impressive lion head-shaped building called Ema-Den, which measures 12-meters high by 11-meters wide! Ema-Den and the surrounding temple structures are all post-war reconstructions of the original buildings that were destroyed in air raids and fires in 1945.

Once you enter the relatively small shrine complex, you will come face-to-face with the fierce Ema-Den. The lion’s eyes, slightly tilted down, seem to stare right at you and its wide mouth reveals pointed teeth. Although the Ema-Den’s appearance is intimidating, its open jaw is meant to swallow evil spirits and leave you with good fortune. Ema-Den becomes even more menacing when the sun goes down and its eyes glow against the night. Why not visit this enormous lion head and let it gobble up your worries?

Aside from the lion head, Namba Yasaka Shrine is also a pleasant springtime spot thanks to its numerous cherry blossoms.

On the third Sunday of January, Namba Yasaka Shrine becomes home to the Tug-of-War ritual, which is an intangible folk cultural property of Osaka City. The Shinto event is a celebration of the Japanese myth of Susanoo-no-Mikoto who killed the serpent god Yamata-no-orochi and freed people from hardship.

Namba Yasaka Shrine is a 6-minute walk from Namba Station.

Lions and Dragons at Yasaka Shrine

Like the Noh masks that have gone before us, the Namba Yasaka Shrine has been 500 years in the making. The lion may look frozen..

Yasaka Shrine is a nice surprise, hidden in a busy metropolis like Osaka. It's an unusual shrine, maybe not easy to find without..

Clean, comfortable beds, elegant décor, close to public transport, helpful staff - The Fraser Residence has them all in spades.

The 60’s are now in the oh-so distant past but the essence of this magic era still remains. Surrounded by the modern neon glow..

Where to Eat Wagashi in Osaka

When in Osaka, visit Namiyoshian to try their signature Mitarashi dango and other types of wagashi.

Sizzle without the smoke at this cigarette free cafe in Namba, specialising in mainstream office worker fare, including beef tongue..

During July and August, the Swissotel Nankai Osaka will be hosting their Pastel Sweets Buffet, which has been popular with visitors..

Among the hustle and bustle of Osaka’s renowned shopping and foodie street, Dotonbori, lies a cobblestone alleyway, Hozenji Yokocho, that leads visitors..