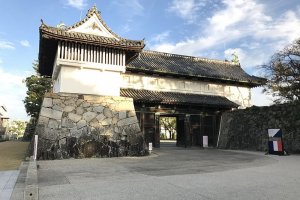 By Japanese standards, Saga Castle is a rather unusual castle. Being built on plains and surrounded by only a wall, whereas most Japanese castles are built on hills or mountains and upon stone bases. This kind of castle is called a hiraijiro.

This castle was built from 1602 to 1611 and was home to the Nabeshima clan, the daimyo family of the Saga Domain. Its nickname, Shizumi-jo, means "Submerged Castle" for the interesting style of rampart that surrounds the castle. With the banks of the moat planted with pine and camphor trees for additional concealment, the castle appears to be almost sinking.

Unfortunately, the castle has seen some destruction. In 1726, a fire destroyed most of the structures; and another fire occurred in 1835. In both instances, the castle was quickly rebuilt. From 2001 to 2004, the main portion of the castle was renovated and today it houses the Saga Castle History Museum. Saga Castle is also the largest wooden castle reconstruction in Japan.

Why not review more places in Saga?

Hotel Route-Inn Saga Ekimae is without doubt a convenient stay if you are planning to spend time in Saga. It is 35 minutes by ..

A great place for all you can eat pasta, pizza and salads in Saga City.

If you are looking for an impressive shrine, then you should simply visit the Saga Shrine. The shrine is dedicated to the Nabeshima family, the heads..

A special exhibition taking place at the Saga Prefectural Art Museum looks at works from Kumamoto-born Tatsuya Tanaka, a photographer..

The Saga Prefectural Museum serves as a window into the region's archeology, culture, history, and folklore. Alongside the permanent..