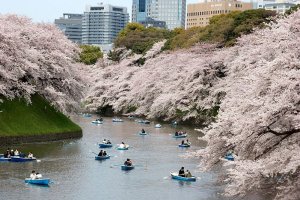 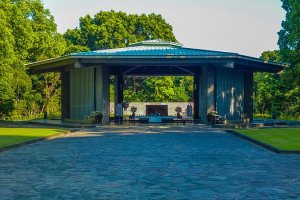 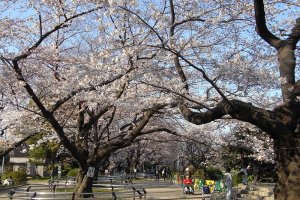 The Chidorigafuchi Trench is one of the best places in Tokyo to see the cherry blossoms in spring, from late March to early April. This 700-meter walk next to the Imperial Palace moat offers beautiful scenery and great opportunities for discovery.

During the popular cherry blossom season, the paths along the moat are colored pink by hundreds of cherry trees. The trees are also lit at night during the Chiyoda Sakura Cherry Blossom Festival. A little later in the year the surface of the water is almost completely covered by falling petals. Many couples rent boats and take a romantic excursion through this pink wonderland.

Hailed as one of the most beautiful places to see cherry blossoms in Tokyo, Chidorigafuchi receives over one million visitors every year for the spring season. Head to the 700 meter long Chidorigafuchi Green Way walking path to discover a tunnel of cherry blossom. Seating along the bank of the moat is extremely limited so arrive extra early if you’re wanting to sit and admire the flowers all day. For a more surreal vista of the flowers admire their beauty at night when the trees are illuminated from sunset to 10 pm.

Boat rentals are available from March to November every year and offer a great way to see the moat, or cherry blossoms if the season is right. It only costs 500 yen for 30 minutes during the offseason and 800 yen for 30 minutes during the cherry blossom season. Wonder in awe as your row through the moat decorated with a blanket of soft pink petals.

Chidorigafuchi Cemetery interred some 350,000 war casualty civilians and soldiers from World War II from air raids and the atomic bombings of Hiroshima and Nagasaki. The monument built in the remembrance of the ugliness of war is a simple and somber one, but impressive nonetheless. The cemetery is accessible between the moat and Yasukuni Shrine.

Chidorigafuchi is directly adjacent to Exit 2 at Kudanshita Station.

Chidorigafuchi Walkway is one of the most popular spots for cherry blossom viewing in Japan. This 770m walkway is lined with 260..

During my first visit to Tokyo I was lucky to arrive in March and stay right through April, the cherry blossom season. I visited..

Chidorigafuchi, the moat around the Imperial Palace in Tokyo is surely one of the prime spots for hanami (cherry blossom viewing)..

Located near the Imperial Palace and the Yasukuni Shrine, Chidorigafuchi Is a national Japanese cemetery and memorial for around..

Yasukuni Shrine (Yasukuni Jinja), located in Chiyoda City, Tokyo, was established in 1869 by Emperor Meiji to commemorate and honor those who gave their..

The Imperial Palace is both literally and figuratively a hub of the Japanese capital. Located in central Tokyo, the palace grounds were once home to Edo..