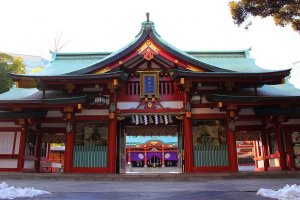 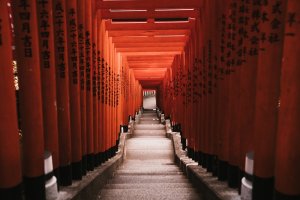 The Hie Shrine is a Shinto shrine in Nagatacho, in the Chiyoda district (Tokyo). Its Sanno Matsuri, which takes place on June 15, is one of the three great Japanese festivals of Edo, the forerunner of Tokyo. The procession consisted of the Edo period 45 floats, was accompanied by singers and dancers and was considered to be one of the best festivals in Tokyo. Nowadays the festival takes place on a smaller scale, but is definitely worth seeing.

The main god of the shrine is Oyamakui-no-kami, the god of Mount Hie in Shiga Prefecture. This deity is also commonly known as Hie-no-kami, from which the Hie shrine gets its name.

The shogun Ieyasu Tokugawa began ruling Japan from Edo Castle. He also became the patron saint of the Hie Shrine and worshiped the deity as the protector of Edo. The citizens of Edo also had a strong trust in the Hie Shrine, where the shogun's patron deity was worshiped.

Hie Shrine on a Rainy Day

Sanno Matsuri is one of the three most famous Tokyo festivals, occurring every 2nd year in mid June. The Grand Parade is the h..

A hidden treasure in Tokyo is the majestic Akasaka Palace. As one of only two state guest houses of the Japanese government, along with the Kyoto State..

21_21 Design Sight is a museum in Roppongi in Minato, Tokyo, which opened in 2007. The design museum was designed by architect Tadao Ando and fashion..