The Sanno Matsuri Grand Parade takes place every even-numbered year in mid-June. It is part of the Sanno Matsuri Festival which is one of the 3 most famous festivals in Tokyo. It occurs every other year, taking its turn with Kanda Matsuri which runs during odd-numbered years in May. During the 11 day festival period, there are many other smaller events on, which are advertised on a Japanese-only website, but the main attraction is the grand parade.

The parade begins and ends at Hie Shrine (or Hie Jinja) near Akasaka. Hie Shrine is a very important shrine as it is believed to be the shrine responsible for the protection of Tokyo. The shrine is also associated with the Tokugawa family who ruled during the Edo period (1603-1867). They used this shrine festival to celebrate Edo becoming the new center of Japan. (Edo was the former name for Tokyo).

The parade has over 500 participants dressed in traditional costumes, playing drums and carrying floats decorated with animals. The most important part of the parade are the three mikoshi (portable shrines), which are carried along the festival route. The shrines are decorated with a phoenix on each roof. The parade is a colorful spectacle and many children, families and workers line the streets to watch the parade pass by.

The parade runs for nearly 2 km and follows a path that leaves Hie Shrine at 7:45 a.m., tracks around Yotsuya Station at 8:45 a.m. and to Yasukuni Shrine by 10 a.m. There is a half-hour stop at the Imperial Palace until 12:15 p.m. The parade then continues past Tokyo Station and has a one hour stop at Nihonbashi Hie Shrine from 1:30 p.m. until 2:30 p.m. The parade passes Ginza clock tower at approximately 3:15 p.m., Shimbashi Station at 4:30 p.m. and finally finishes by 5 p.m. back at Hie Shrine.

At Hie Shrine people line up to pass through the large straw ring that is set up during the festival. Passing through this ring is believed to purify you from all your sins of the last 6 months. There are also food stalls and vendors to help satisfy your appetite after a long walk through the city.

Find out more about Hie Shrine. 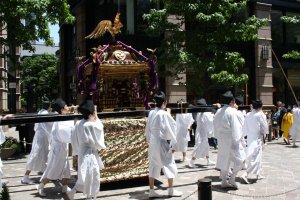 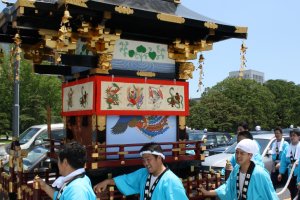 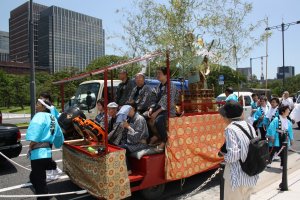 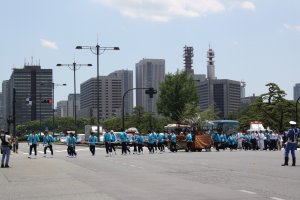 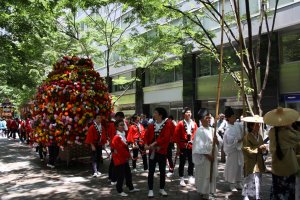 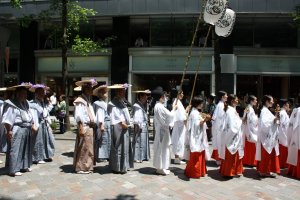