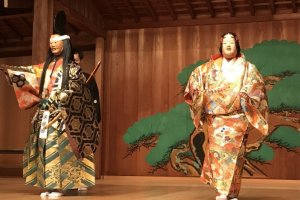 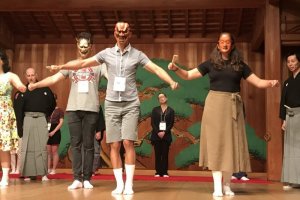 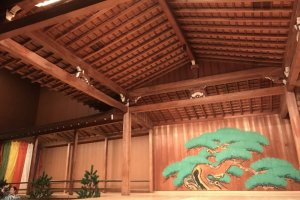 A narrow street any casual passerby might miss—but venture down this Meguro side street and you’ll find the Kita Noh Theatre. Ask any Japanese person and they may tell you that Noh is difficult to understand or too out-of-date, but you’ll also find that most have never seen this traditional art form.

Events at this attraction are canceled as part of a nationwide drive to help curb the spread of the novel coronavirus (Covid-19 disease).

Noh is many things. It has roots in the old military-ruling class of Japan who were official sponsors of the art form, and it has even experienced a few major upheavals—the dismantling of the ruling warrior families, for example, forced Noh to establish schools and find alternative means of sponsorship. And yet, this centuries-old stylistic theater performance has survived.

The theater began in 1893 it burned down during the Kanto Great Earthquake in 1923 but enjoyed a donation from Asanoke Betei Noubutai for a new stage and place to perform. Later, during World War II, it burned down once more—this served as another major turning point for Noh as an art as well, which struggled to survive after the war shortages and the decline in patronage.

You can enjoy a real viewing of Noh at the Kita Noh Theatre in Meguro, Tokyo. Reconstructed at its current location in 1955, the theater seats 385 guests and there isn’t a bad seat in the house. This is largely thanks to how Noh is performed; Noh actors must consider their 360-degree positioning while moving on the small stage and bridge to allow for the most artful appearance.

While you sit at the Kita Noh Theatre, enjoy the authentic venue and rich pine tree painted as the backdrop for the plays (also painted during the reconstruction). Be enamored by the live performances by skilled professional Noh actors. Feel the drum and flute play in your chest with the chorus chants along to the story played and danced out by the main roles, and marvel at the luxurious silk costumes and hard-carved masks—both of which can be several hundred years old. Truly, Noh is an art to be treasured.

Be sure to check out the Kita Noh's schedule for information on shows and how to buy tickets. The site is in Japanese so you may need to ask a Japanese friend or hotel staff for assistance. Prices can vary by show, but each performance is a gem to watch.

This main dance stage serves as the performance stage for Noh and Kyogen narratives at the Kita Noh Theatre. The stage area covers just under 6 meters by 6 meters but allows for a great range of motion to be viewed from the seats in the gallery. It’s built in the traditional outdoor style but allows visitors more comfort indoors.

When the Kita Noh Theater was reconstructed in 1955, the painter Takashi Esaki and Ao Maeda took care of the symbolic pine panel and painting. The thick roots and branches symbolize the strength and solidity of Kita-style samurai art while instilling a sense of simplicity and spirit.

The Kita noh Theatre seating gallery allows for two levels of seating which can accommodate 385 people. Thanks to the angle and the nature of Noh and Kyogen performances it ensures that no matter where you sit that you’re sure to enjoy the show.

It's an easy 10-minute walk from the West Exit of Meguro Station.

An Introduction to the World of Noh

Noh is one of the oldest traditional Japanese performance arts. It is similar to Kabuki as it incorporates storytelling throug..

Noh theatre workshop in Tokyo creates an immersion into the traditional world of performing arts in Japan.

Unveiling the Charming Art of Noh

Located right next to the vast Shinjuku Central Park, THE KNOT TOKYO Shinjuku is a modern boutique hotel with convenient access to nearby Shinjuku Station..

In Gotanda in central Tokyo, HOTEL MYSTAYS is a well located, comfortable and affordable hotel.

Located right outside Meguro Station, this is a restaurant where you can eat the fish you catch yourself in one of the two tanks. Serves all kinds of..

The highball is a popular drink for both men and women. The diverse selection of highballs at this specialized bar will make your night magical.

The Meguro River (目黒川, Meguro-gawa) is a river that flows through Tokyo, Japan. Its tributaries include the Kitazawa River and the Karasuyama Riv..

The digital sky system at this incredible planetarium is capable of a 360-degree projection that will make you feel as if you're in outer space. Various..

Large store engaged in buying and selling of books, CDs, DVDs, digital appliances, brand goods and more. Video games and books are on 1F and menswear,..