An Introduction to the World of Noh

Noh is one of the oldest traditional Japanese performance arts. It is similar to Kabuki as it incorporates storytelling through dance, music and costume design. However the most recognizable difference between the two is in Noh’s use of masks to express character emotions while Kabuki does not. The art form is also known as Nohgaku when comical sketches called Kyogen are interspersed throughout the acts.

Noh has a long history that actually predates Kabuki. With its origins tracing back to 6th century China, as the art form was developing, the pre-Noh era incorporated a variety of folk and performance art genres. It was during the Muromachi period around the 13th or 14th century that a father and son team, Kanami and Zeami, developed the various genres of music, dance and storytelling, combining them into what became known as the Noh we have today.

For much of its existence, Noh catered to the higher ruling samurai and wealthy class and grew in popularity throughout the Edo period when it was patronized by Tokugawa shogun. After the fall of Tokugawa, Noh suffered greatly financially. But with the support of the Meiji government, it saw a transformation and revitalization, making it open to all the public including foreign visitors. In 1957, the Japanese Government designated Nohgaku as an Important Intangible Cultural Property, providing legal protection to the tradition as well as its most accomplished performers. In 2008, UNESCO recognized Noh and included it on the Representative List of the Intangible Cultural Heritage of Humanity. The history and art form of Noh is an interesting and important part of Japanese culture, but not too many people are familiar with it.

I recently participated in a program to discover Noh, which was a two-part program including a workshop and a performance piece. It was held at the Kita Roppeita XIV Commemorative Noh Theatre and featured performers of the Nohgaku Performers’ Association. Presented in Japanese with English interpretation, the program is adapted for an international audience.

We learned about the history of Noh including an explanation deconstructing each component of the art form. The explanation goes into detail about the the performers, costumes, masks, stage, and instruments.

There are four major categories of Noh performers, who are typically all male: shite, waki, kyogen, and hayashi.

The performers are dressed in kimonos of different styles and designs, the shite will wear the most elaborate and colorfully designed kimono while the others on stage such as the hayashi are dressed in black as it implies they are not to be seen.

The masks that are worn by the shite I found to be most fascinating and we were able to see them up close and try them on as well. Each mask represents a different emotion and/or character, so one single performer can portray a different gender, age and express a multitude of emotions by wearing the masks.

In the beginning, Noh stages were built outdoors usually at shinto shrines as there is a connection of Noh as a performance for the gods. Modern Noh stages can be found indoors but the stage design and size are always the same. It was interesting to learn about the pillars acting as a spatial guide for the performers so they don’t go too far off the edge of the stage. One of the unique stage characteristics of Noh is that there are no decorative elements apart from one painting of a green pine tree on the back panel of the stage.

Another part of the experience involved the instruments and the opportunity to play around to hear how they sound and how they accompany the songs, which are more similar to chants. There are four main instruments used in Noh:

The highlight of the program was the shite getting dressed on stage from head to toe and seeing his main performance combining everything that we had experienced for the grand finale. This experience has certainly given me a better understanding and appreciation of Noh. 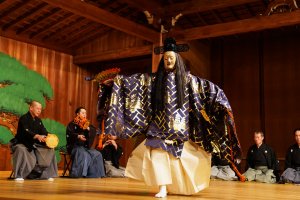 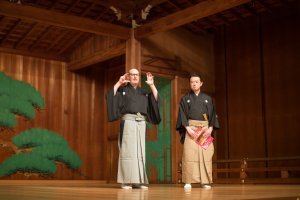 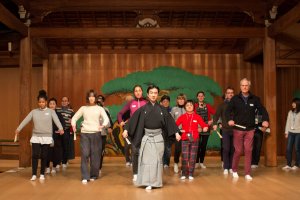 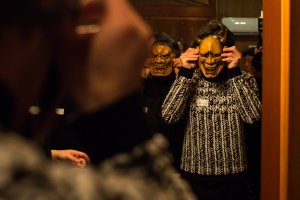 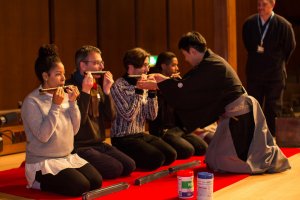 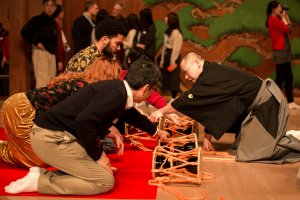 Susan Tumanon 2 years ago
This is awesome! I hope they will have regular workshops like this for foreigners. Great way to learn and experience Japanese culture.
Reply Show all 0 replies

Elena Lisina 2 years ago
I like masks, music and scenery, but unfortunately can't understand the action - it seems too slow.
Reply Show all 2 replies

Elena Lisina 2 years ago
It's great and sure will be very helpful! But for me maybe it's not only about understanding - that mesmerizing tempo makes me fall asleep even tough I struggle to watch! Sorry! :D
Reply

Sleiman Azizi 2 years ago
Noh is fantastic. I wrote a Noh play once, not a very good one mind you, but I tried. The artistry involved when done right is first class.
Reply Show all 0 replies

Kim 3 years ago
I’d love to experience this one day! Sounds like an amazing cultural experience!
Reply Show all 0 replies
9 comments in total
Back to Contents