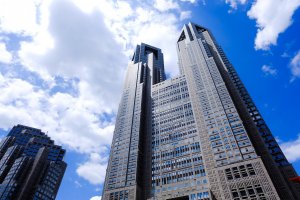 The Tokyo Metropolitan Government Buildings (東京都庁舎, Tōkyō Tochō) are comprised of the North and South and house many offices relating to the local city government. The building is best known for its free observatories, one in each tower, which offer stunning panoramas of the city and the surrounding prefectures.

The observation decks sit at 202 meters above the ground, giving visitors a true birds’ eye view of the Tokyo skyline. Iconic structures – such as Odaiba’s Rainbow Bridge, the Tokyo Dome, the Tokyo Skytree and Tokyo Tower – can usually be seen. On clear days, Mt Fuji is often visible on the horizon. Panels along the walls of both observatories detail the buildings that can be seen from each direction.

The building is designed by Kenzo Tange.

Each observatory boasts a café as well as a small souvenir outlet. On the 2nd floor of the building, there is also a large tourist information center that dispenses brochures and knowledge on all parts of Tokyo, as well as some of the surrounding cities and prefectures.

The government buildings often host local product fairs on the observation decks to highlight regional delicacies and goods. Past fairs have featured such items as Shizuoka’s tea and seafood products, apple-themed goods from Tohoku and soba noodles from the Nagano region.

The Tokyo Metropolitan Government Buildings can be reached in a ten-minute walk from JR Shinjuku Station (signed along the underground passage) or in a minute’s walk from Tochome Station on the Oedo metro line.

The Tokyo Metropolitan Government Building towers over the west side of Shinjuku and is hard to miss. It provides visitors with..

If the weather is clear, you can enjoy views of the Tama mountains and Mount Fuji. This is an inexpensive tourist spot. And with..

Curious to see Tokyo's nightscape from the 45th floor of a government building? Head to Tokyo Tocho Observation Deck!

If you had a chance to see the entire city at the same time, you would grab it, wouldn’t you? You can enjoy that fabulous Toky..

Take a break from the concrete skyscrapers of Shinjuku City at Shinjuku Central Park. This natural getaway is located in western Shinjuku and is the ward’s..

The robot restaurant in the Kabukicho Shinjuku entertainment district offers an extraordinary experience for those looking for something really flashy...

Shinjuku Golden Gai is a small area in Kabukicho, Shinjuku, that is famous for both an area of ​​architectural interest and nightlife. It consists o..