Halloween Night in the Forest

Halloween Night in the Forest is an annual autumn night illumination event in Shinrin Park, also known as the Musashi Kyuryo National Government Park. It is the first of three illumination events the park holds each year. Unlike the autumn illumination event that is held in November, this event is only held on weekends and public holidays. It is particularly popular with families thanks to the Halloween decorations.

The event itself is free, but adults have to pay to get into the park (¥450). Children can enter the park for free.

By car: The central gate parking lot is open until 9 pm on the nights the illumination is on. 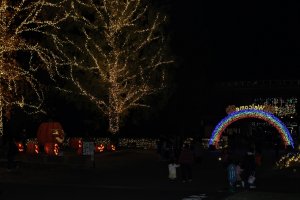 Halloween Night in the Forest (森のハロウィンナイト)

Kim a year ago
Family-friendly illuminations are always a winner! Nice to see this is still going ahead this year, albeit without the additional events!
Reply Show all 1 replies

Lynda Hogan Author a year ago
You are a star. Thank you sooooo much. I love this event, we go every year so I was so happy when they announced it'd be on this year.
Reply
2 comments in total