One of the three big plum festivals in the Kanto plain

Ogose Bairin, Plum Blossom grove, is one of the three great plum blossom gardens of the Kanto Plain. The Kanto plain is the area around Tokyo including Saitama, Kanagawa, Chiba, Ibaraki, Gunma and Tochigi prefectures. The most famous of the three plum blossom groves however, is Kairakuen in Mito City, Ibaraki. The other is Soga Bairin in Kanagawa.

The Ogose plum blossoms tend to bloom from mid February to mid March. Accordingly, the festival is generally held around the same period. In 2021, festival dates have been set as from Saturday February 13th to Sunday March 21st. During the period of the festival it costs ￥300 to enter the plum grove.

During the period of the festival, they have a mini train that winds its way through the grove. There are also live music and dance performances. They have a few festival stalls selling things like chocolate banana and candy floss. There are a couple of places you can buy proper food too. They also sell plum blossom trees and bonsai at the festival. The very cute town mascot "umerin" also makes an appearance on weekends.

By public transport: The nearest train station is Ogose Station on the Hachiko line. Ogose Bairin is a 40 minute walk from the station. You can normally get a shuttle bus during the period of the festival. However, in 2021 on account of the coronavirus the bus may not be available. It hasn't been confirmed either way yet.

By car: Parking costs ￥500 per car. There are cheaper independently run car parks further away from the park. 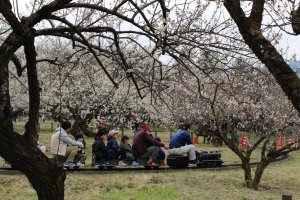