Night Kagura - Theatre For the Gods

Kagura is a dance theater with a long history in the old country of Iwami (currently west Shimane prefecture). This entertainment form is a living part of the region's summer festivals, with many preservation societies still performing.

Kagura is a dance and music ritual in the Shinto religion, which through stories performed for the joy of the gods, asks their favor in the coming year. The stories are mostly of gods or emperors killing evil demons, or charming characters doing simple things like fishing. The demons were thought to be connected to natural disasters and bad crops, so by telling stories of heroic gods fending off the demons, the locals hoped the gods would do the same. The origins are believed to come from the Amano story written in the Kojiki, which is one of the oldest records of Japanese history and folklore.

Swirling dances and the face of demons

While kagura is a theatrical performance with elaborate costumes, the event it self is a simple one, with locals from all sorts of life gathering for a show, sitting down on the tatami floor in an uncontrolled manner. It might feel like attending a neighborhood gathering, rather than a theater. There are many stories in the kugara repertoire, but mostly the next four are performed. There is a small wooden plate usually hanging from the top of the stage, with the title of the play, one can try matching it with the following stories:

塵輪 Jinrin : an emperor is fighting of demons with his comrade, to defend Japan. 天神 Tenjin: The god wisdom is betrayed by a rival, and a battle starts between the two. 恵比寿 Ebisu: The god of luck and trade goes fishing. It is a charming performance, get in front with your children for surprises. 大蛇 Orochi: A serpent with many heads, keeps stealing the daughters of locals, until a hero shows up to save the day. He gives the monster sake with poison, and the fierce battle starts.

In same cases, at the end of the performance, the audience is welcomed to touch, take in hand, or sometimes even get into the costumes, to have pictures taken.

Mame-chishiki means small trivia. The trivia for kagura: A serpent body is made of Japanese paper, using the same technique as the UNESCO World Heritage Sekishu washi paper. Its length can reach 15 meters, and as you can imagine it is quite heavy. Also, the masks of the demons usually have open mouth an the gods have closed mouth, which helps differentiate them. 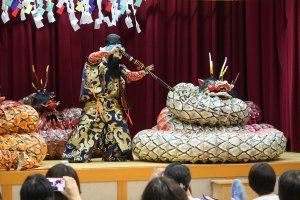 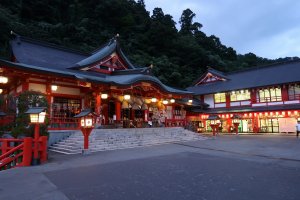 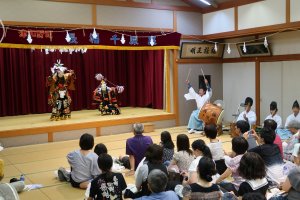 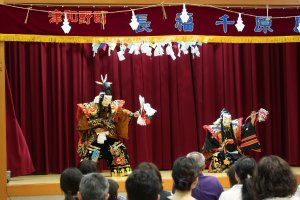 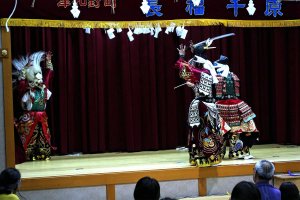 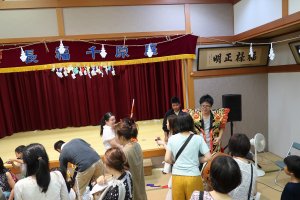