A limited-time event at the Shizuoka City Museum of Art

The children's picture book "Peter Rabbit's Story" was originally published back in 1902, and will celebrate its 120th anniversary next year. In honor of this, the Shizuoka City Museum of Art will host a special exhibition under the theme of a grand birthday party for Peter Rabbit from September 15th until November 6th 2022.

Approximately 170 items will be on display at the event, including original sketches, private editions and drafts of the book, and more.

Ticket prices for the event have not yet been determined, however they should be posted on the official website closer to the commencement date.

For those who plan to drive to the museum, it's located around 15 minutes from the Tomei Expressway's Shizuoka IC. There is no dedicated parking lot for the museum, but there are several paid lots in the surrounding area. Details about parking lot options can be found on the official museum website. 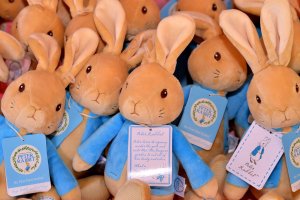 Justin Velgus a month ago
It is nice to have this info so far in advance. It looks like the same exhibit will be held in Osaka at Abe Harukas Art Museum (あべのハルカス美術館) from July 2nd to September 4th, 2022.
Reply Show all 0 replies
1 comment in total