Over 700 years old, noh theatre interspersed with the comic performances of kyogen, is the world's oldest theatre art. Enigmatically beautiful, both theatre styles maintain their appeal with a unique combination of cultural story, dance, music and costume.

The National Noh Theatre in Tokyo, established in 1983, is one of the nation's major traditional theatre halls and hosts performances of both the stylised drama of noh and the comic relief of kyogen. Both monthly regular performances and special performances are held here as well as unique 'dissemination performances' where various noh and kyogen plays are introduced and commentated on. Various On May 14th, the theatre will be staging a Dissemination Performance to help promote the art with commentary of the kyogen play, Fuji Matsu (The Fuji Pine) and the noh play Kosode Soga (The Soga Robe).

Fuji Matsu, performed by the Izumi School, is the story of the humorous tit-for-tat desperation of a less than witty master trying to get his hands on his servant's lovely potted plant and the servant's attempts to prevent that. Kosode Soga, performed by the Kanze School, is part of the revenge story of the famed Soga brothers as they visit their mother to mend a family rift.

The theatre has seating for 627 guests with tickets available from JPY3,000 (discounts available for students). A bonus for visitors is that both English and Japanese subtitles are available on the backs of each seat, making such dissemination performances a great way to experience one of Japan's truly unique cultural treasures. 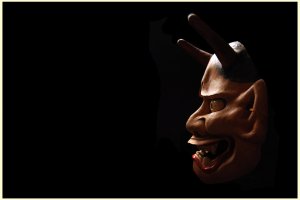 Justin Velgus 2 weeks ago
I heard even Japanese people have difficultly understanding the old style, traditional Japanese language. Having bilingual commentary should allow the cultural art to more easily understood and appreciated, for hopefully another 700 years!
Reply Show all 0 replies

Kim 2 weeks ago
That mask is a powerful image!
Reply Show all 1 replies