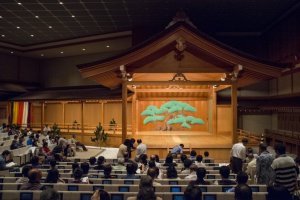 The National Noh Theater is located in Shibuya City, a mere three minutes walk from Shinjuku Gyoen National Garden. Opened in 1983, the facility is run by the Japan Arts Council and hosts various noh, kyogen, kabuki, and bunraku performances throughout the year.

The nearly 600-seat theater is composed primarily of wood and features an elegant 400-year-old cypress stage with a pine tree painted on the back, which is customary for noh stages. The facility also includes a rehearsal stage, lecture room, and reference library, as well as an exhibition area called the Traditional Performing Arts Information Centre. This center is located on the first floor and displays costumes, props, and ukiyo-e woodblock prints. It is free to enter and is open from 10:00–18:00.

You can purchase tickets online, reserve them by phone, or buy them at the theater.

Noh is a traditional form of Japanese theater that uses music, dance, gestures, masks, and elaborate costumes to tell a story that is often related to legends and history. Kyogen, on the other hand, is a comedic performance that relies on witty dialogue to make the audience laugh. The combination of the two, in which kyogen is performed during breaks in the noh performance, is called nogaku and is recognized as an UNESCO Intangible Cultural Property. Kabuki is another form of traditional theater that utilizes song and dance for storytelling, and bunraku is a type of Japanese puppet theater.

The theatre is a 5-minute walk from Sendagaya station on the JR Chuo or Sobu lines, or Kokuritsu-Kyogjjo station's A4 Exit on the Toei Oedo Line. From Kita-Sando station's Exit 1 on the Fukutoshin Line, it's a 7-minute walk.

On May 14th, the National Noh Theatre will host dissemination performances of the kyogen play, Fuji Matsu and the noh play, Kosode..

A Day at the National Noh Theater

The National Noh Theater is a 5 minute walk from Sendagaya Station on the JR Sobu Line, and is where traditional Noh and Kyogen..

Seeing a Noh play at the National Noh Theatre in Tokyo is easy. Tickets can be bought at the box office or online. A free NTJ membership..

Have you ever been to or considered to go to a japanese event in ancient japanese language and felt lost or gave up trying to understand..

An Exhibition of Noh Theatre

The National Noh Theatre near Shibuya in central Tokyo is holding a free exhibition of historical noh theatre artefacts once belonging..

On May 14th, the National Noh Theatre will host dissemination performances of the kyogen play, Fuji Matsu and the noh play, Kosode..

Shinjuku Gyoen is one of the largest and most popular public gardens in Tokyo. The park is just a short walk from the well-known Shinjuku district and..