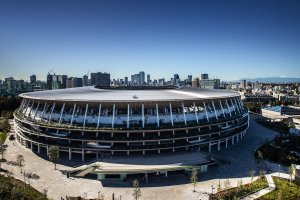 The National Stadium was used as the main stadium for the 1964 Tokyo Olympics and was then converted into a brand new stadium for the next Tokyo Olympics and Paralympic Games. It is located in Kasumigaoka, Shinjuku District, where the Olympic opening and closing ceremonies will be held and Paralympic Games, as well as athletics and football matches, after which the stadium will be used for sporting and cultural events.The stadium has a capacity of 68,089 seats.

There is a park landscape with lots of trees around the stadium. The open facade is fitted with greenery all around and is intended to promote ventilation of the interior of the stadium. During the construction, attention was paid to the use of natural materials such as wood. This, which comes from 47 prefectures in the country, was also used for the roof construction, the facade, as well as for the changing rooms and boxes.

Tokyo will be hosting the 2020 Summer Olympics and Paralympics in July and August 2021, guaranteeing a great time to visit Japan...

The 2020 Olympic Games: The National Stadium

The National Stadium will be used as the main stadium for the 2020 Olympic Games for the Opening & Closing ceremonies, track and..

This huge park in the heart of Tokyo is known for its numerous sports facilities. It also offers many other attractions for visitors of all ages. The..

The National Noh Theater is located in Shibuya City, a mere three minutes walk from Shinjuku Gyoen National Garden. Opened in 1983, the facility is run..