In late July each year, the Shinbashi neighborhood and resident's association, along with many volunteers, hold a two day festival of dancing, drumming, eating and drinking. The festival area is set up around Shinbashi SL Plaza, which is in front of the JR Shinbashi train station & a second event area is located in nearby Sakurada Park.

When you arrive at SL Plaza, you will see a large stage, next to the stage there is a tent with volunteers handing out paper fans and an information sheet with a map and event guide.

The SL Plaza is named after the steam locomotive displayed there and is the location of the original starting point of Japan's first railway. SL Plaza is also known to be a popular spot for television reporters to interview office workers (salarymen) for their opinions on current news issues.

The main attraction at the SL Plaza stage is the Yukata Beauty Contest which is held from 6:30 p.m. on the Friday night of the festival. Contestants are judged on the beauty of their yukata (summer kimono) and their ability to answer some simple questions about themselves from the judges. The winner walks away with ¥100,000 and a four-night trip to Hawaii. The contestants were very beautiful and they had many admirers in the crowd watching them.

In the Sakurada Park area they have a stage set up for the Bon Odori dancing. Bon Odori is a Japanese style of dancing to honor the spirits of one's ancestors. The style of dancing and the music used for Bon Odori is unique to different regions. There is usually a wooden stage called a yagura, set up for the musicians and singers. Everyone else dances in a clockwise direction around the stage. Taiko drumming and Bon Odori dancing takes place on both festival days.

People of all ages were out enjoying themselves, older couples were dancing, kids were playing the carnival games and watching the drumming, everyone was enjoying the food and drink stalls. We particularly enjoyed trying beers with frozen heads and the Mojitos that came with a free hug. The seafood was fresh and delicious too. Everyone was in very good spirits, it was great to see so many people out having a good time on a hot summer night. 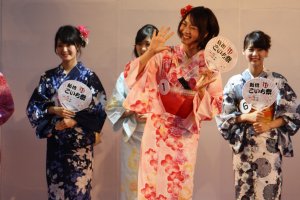 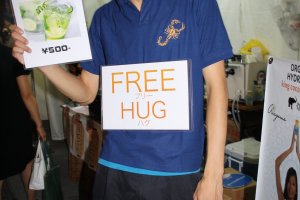 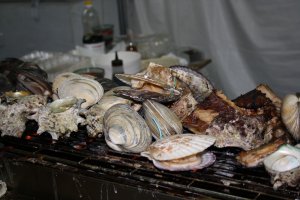 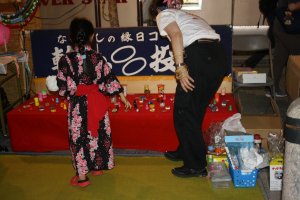 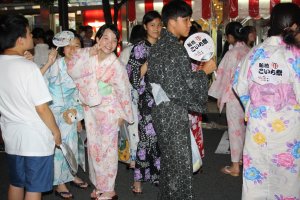 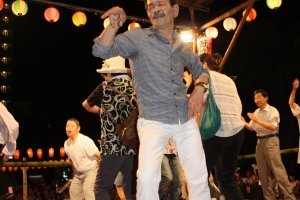