I happened to chance upon this small family owned sweets shop in the Osu shopping district. What first caught my eye were the many baskets of small items lined up in the middle of the shop. It was neatly arranged, each basket was right next to each other, and the three storey shelf was just full of goodies, with some baskets almost overflowing. Each basket had a price tag, and the lowest was just ¥10 without tax.

Taking a closer look, I realized they were all sweets and snacks. Many are popular among Japanese children, and I would imagine that entering this shop will bring nostalgic memories to the Japanese adult, such as those so beautifully depicted in the movie An. A huge variety of the snacks are sold in individual packets, and this makes it easy to purchase as you can mix and match as many types and flavors as you want. There were fried sugar-coated donuts, crispy ramen noodles, chocolates, gummies and more. Apart from the small individually packed items, there were also the usual snacks found in supermarkets or souvenir shops around the prefecture.

One popular snack that I particularly like is umaibo, a puffed, cylindrical corn snack, which has been manufactured for decades and is still selling well. Imagine the excitement with almost twenty flavors here! As expected, it was just ¥10 here, which made it easy to purchase without hesitation. In fact, I realised why all the small items were placed on lower shelves, so as to be within the easy reach of children, as they were the cheapest stuff in the shop, and affordable.

What was interesting in the shop was this stick that looks like a pencil, with designs of the popular chocolate snacks in Japan. Upon looking at the signboard, I realised that in fact they were edible chocolates! They had really looked like usable pencils, which made great souvenirs to bring home for friends.

The candy store is a 7 minute walk from Kamimaezu subway station. 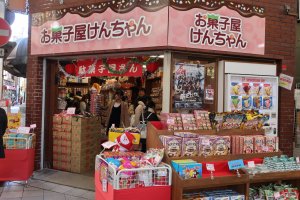 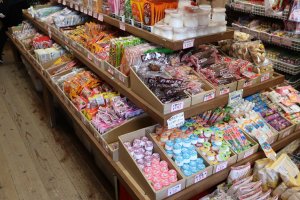 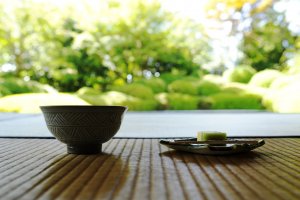 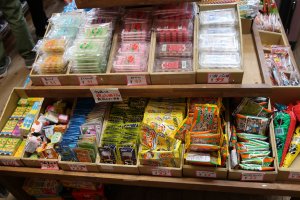 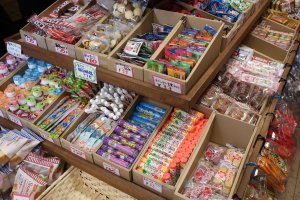 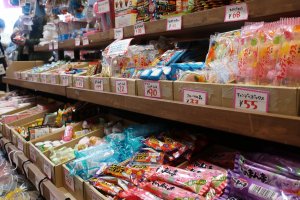