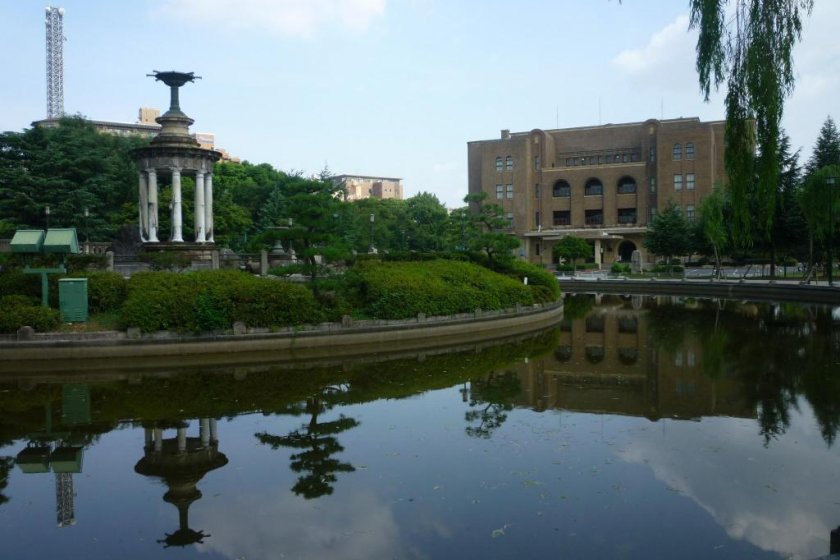 Tsurumai Park, or literally “Crane Dance” park, about two kilometers south of the city center in Nagoya’s Showa Ward is not only famous in Nagoya, but is recognized nationally as one of the 100 top cherry blossom viewing places in Japan. It’s also famed for it’s year round offering of beauty, being filled with not just cherry trees, but many thousands of glorious roses, tulips, irises and hydrangea.

Nagoya’s Tsurumai Park dates back to 1909 when it became Nagoya’s first official city park. Covering an extensive 23.7 hectares, the park was built on reclaimed marshland. Tsurumai, or Tsuruma as it is also known, was created in time to host the Tenth Annual Kansai Prefectural Convention.

To commemorate the wedding of the Emperor Hirohito, the Nagoya-Shi Kokaido, or Civic Assembly Hall, a large four-storey reinforced concrete hall was constructed in 1930. The hall survived the American Air raid bombings of 1945 that destroyed the Montenkaku and Sarumen Chaseki Teahouse, two National Treasure designated buildings in the park.

Immediately following World War Two, Tsurumai Park was taken over by the occupational forces command, who ordered the land be utilized as an army base and housing quarters for the allied soldiers. The Civic Assembly Hall was taken over as the local Allied Command centre. The land and the assembly hall were finally returned to the city in 1956.

Over the years, the hall with parking space for 247 vehicles has been the venue for concerts by many big name bands including Deep Purple, Barry Manilow, Culture Club, the Eurythmics and more.

In the spring, the park is alive with hanami, or cherry blossom viewing parties. Tsurumai Park boasts many hundreds of cherry trees which draw the crowds every year in late March or April. Guessing the exact dates of the peak blossom season each year is a national pastime as dates are chosen to hold the often raucous parties.

Thousands vie for the best spots under the blossoms, staking out their territories with blue plastic tarps and large panels of cardboard. Companies or groups often delegate one “lucky” (or lackey) member as the official spot finder and keeper, in other words, the person who has to rise early and be at the park as early as 5am to secure the best spots, set up the ground covering, and “hold the fort” until the others arrive at the designated time.

Many different food stalls ranging from yakisoba fried noodles to BBQ squid on a stick are available from the hundreds of food stalls that spring up, and the park’s nearby subway and rail station convenience store and small shops do a roaring trade during that particular week.

For the rest of the year the park is popular with picnickers, photographers, joggers, walkers, and people coming just to look at the flower gardens and enjoy the beautiful surrounds. We were there early one morning recently and witnessed an elderly gentleman with a wooden bokuto practice sword practicing some iai-jutsu sword discipline moves.  A grand Italian Renaissance style rotunda restored in 1997 but dating from 1910 lends the park an air of old world charm and is a well known rendezvous point. The many fountains and ponds, also grace the wide area.

Once established, Tsurumai Park was redeveloped into Nagoya’s first zoological gardens, and became home to 800 animals of 250 different species including elephants, bears, crocodiles, camels and more. The zoo was expanded and relocated to its current site at Higashiyama in 1937. All that remains are the gate stone pillars. Apparently some of the ponds were parts of enclosures from when the park was a zoo.

There are tennis courts on the northwest corner, a small playground area for children, track and field facilities and the baseball field, often used by the nearby elementary school. At the south eastern corner of the park is a large dome shaped tumulus,

The ancient Mt. Hachiman Burial Mound. 82 meters in diameter and ten meters high, it is the largest circular burial mound in Aichi Prefecture. During the war, the tomb was cleared of trees and set up for use as an anti-aircraft battery!

The original Trsuruma Central Library on the southern border of the park was established in 1923 but was destroyed during the 1945 air raids and rebuilt as Nagoya’s largest public library in 1952.

It has seen a lot of action in it’s 100 year history, but today, Tsurumai Park is a peaceful and relaxing and thoroughly refreshing retreat just moments away from the city center. 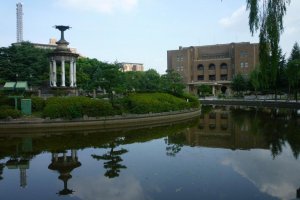 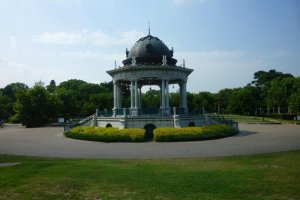 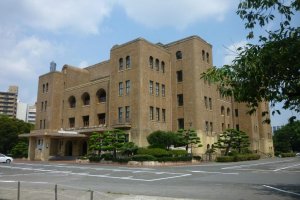 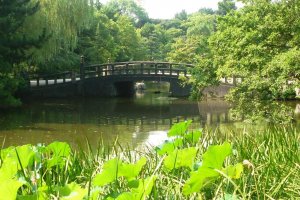 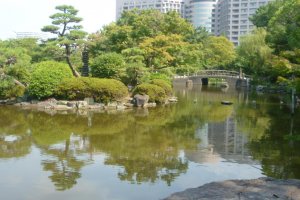 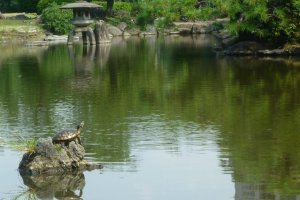