Costumers from around the world compete to be the best

Once a year hobbyist costumers are chosen by preliminaries in their countries and flown to Nagoya in order to compete in a worldwide contest during late July and early August.

This year's event is taking place online rather than at in-person venues, details here: https://www.worldcosplaysummit.jp/en/

Beginning in 2003 and featuring only three countries, the World Cosplay Summit (or WCS) has grown to include more participating nations each year. As of 2012, there are twenty countries (Australia, Brazil, China, Denmark, Finland, France, Germany, Indonesia, Italy, Japan, Korea, Malaysia, Mexico, the Netherlands, Russia, Spain, Taiwan, Thailand, the United Kingdom, and the United States) which currently compete. Brazil has an excellent track record with three overall wins – the most of any country.

Teams compete in craftsmanship and presentation of skits and are judged by a panel of people involved in the worlds of cosplay and anime – from website coordinators to voice actors. The performance portion of the contest includes a musical act.

There are three parts to the summit that the average on-looker can enjoy – two parades and the skit performance – spread over two days.

Sunday evening is the performance of the skits at Oasis-21 in Sakae (subway station Sakae exits right into Oasis-21). There is a cordoned-off seating area where you can buy a ticket to watch from, or you can watch from the sidelines or various levels of Oasis-21 for free.

Before the actual show with the representatives, there is a cosplay event in the general area in the preceding hours. Bring your own outfit, dress up, and join in the fun! If you want to participate as a cosplayer at the event, there are particular rules you have to follow as to when and where to get changed, so please check the information available in English on the website. There is a 700yen fee involved with the changing rooms, but as you’re not allowed to show up already in costume, this is really the only way to go. Warning to those used to western conventions – these changing areas are a WIDE OPEN room, separated only by gender, but everyone keeps their eyes to themselves pretty well.

The lights on stage flare, the music picks up, and an countdown shows up on the screen above the stage. The crowd counts down, and the cosplayers parade on the stage like models in a fashion show in their competition outfits (different from the parade and other promotional events) which in most cases have been made specifically for the occasion. In from the side, down the catwalk, POSE! and back off the opposite side of the stage while a digital collage representing their country plays on the screen.

The skits are presented in a randomly selected order with each team having under five minutes to strut their stuff. Historically, the most successful skits don’t have words, but if they do, it has to be English or Japanese. The stage goes dark and a video introduction of the representatives starts. They speak in their native language, but it is sub-titled for convenience of the viewers.

Halfway through the skits, there is a performance by the musical artist or group involved. The year I went, it was SKE48, the Nagoya-based version of the idol super-group AKB48. In 2012, the artist will be May’n.

Teams are scored by their overall points to receive the ultimate prize of Grand Champion. Subsequent places are named for their sponsors. The runner-up receives the Bushiroad prize, and third place gets the Tokai Walker prize. The team with the best costumes who may or may not have had other qualifying points receives the Brother award, sponsored by the sewing machine company. The Brother award is therefore considered most desirable by some cosplayers.

After all of the teams have completed their performance, the judges confer and the teams come back out on stage and arrange themselves in two rows with one partner standing and one kneeling in front. The results are announced from bottom-to-top and the winners are awarded with giant cardboard signs of their victory.

Go and cheer for your country! Or cheer for another country, if you think they’re better. It’s a fun show. Hopefully it won’t rain this year, but the performance also takes place if there’s rain because the performance area is covered, but those who stand too far outside the seating area might find themselves without the protection of the overhead glass Oasis 21. 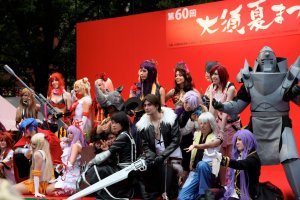 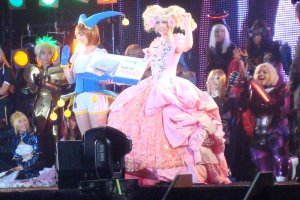 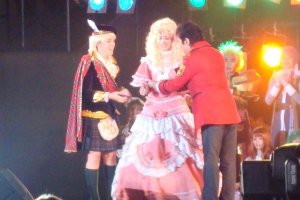