Coming from northern Japan in Akita Prefecture, the Akita dog, or "Akita-Inu" in Japanese, is a strong, hardy, and affectionate breed. The breed is said to have developed from the ancestors of dogs in the city of Odate in Akita Prefecture during the Edo Period. Until 1957, its ancestors were used for hunting bear, boar, and deer. Hunting with dogs and dog companionship date back to as far as 12,000 years ago in Japan. Since originally being bred for hunting, the Akita is now known for its loyalty and seldom barking, making it the perfect companion dog.

The Akita is one of the oldest and largest dog breeds in Japan. Akita Prefecture is said to have three cultural icons: the matagi (bear hunters), kiritanpo (pounded rice on skewers), and the Akita Inu. Akita Inu assisted hunters in the mountainous Akita Prefecture by trapping bears until the hunter could come and approach it. The legend is that 500 years ago, a Japanese official lost favor from Emperor Taisho. He and his family were exiled to the outer islands of Japan. The island was full of Yezo Bear (an indigenous bear weighing up to 500 kg). The official decided to create a new breed of dog by combining an ancestor to the Mastiff, a Japanese spitz, and two different types of wolves. With this new “Akita” Inu, he was able to remove the bears on the island.

Sometimes mistaken for a Shiba Inu, the Akita Inu has a much larger body (sometimes twice the height) and a weight between 70 and 100 pounds (31 to 45 kg), meanwhile the Shiba Inu has a weight of up to 25 pounds (11kg). Akita Inu are a confident breed and can be found with colors such as white, black, tan, fawn, and brindle. They have a short double-coat or long-coat, and there are different strains of Akita from America and Japan. Adult male Akita Inu can reach a height of up to 70 cm. The Akita are frequently described as "cat-like" because they tend to think and act independently, and sometimes groom themselves like a cat.

The Akita breed has been a guard for Japanese royalty during the feudal era, a bear/deer hunter, and a protector for families. The Imperial Samurai liked these dogs so much that they believed if one samurai died dishonorably, he would be sometimes given a second chance by being reborn as an Akita. This way he could have the chance to die defending the life of his master, regaining his honor. Akita Inu are also excellent in protecting adults and children. In fishing villages, the Akita would stay home and care for the children, protecting them and preventing them from leaving the house. After the samurai's admiration of them, Emperor Taisho later decreed that all Japanese could keep the Akita breed.

The Akita Inu is known for its strong loyalty to its owner. The most loyal Akita could very well be the famed Hachiko, born in 1923. Hachiko was owned by Professor Hidesaburo Ueno, who lived near Shibuya Station. In 1925, Ueno had a brain hemorrhage at work and passed away. Despite his master’s death, Hachiko waited for 9 years at Shibuya Station. Shortly before Hachiko’s own death, he was immortalized at Shibuya station in April 1934. Other influences of the Akita's increasing fame were from Helen Keller and Vladimir Putin. Helen Keller raised its popularity after participating in speaking events around the Pacific and bringing back the first Akita Inu to America. Putin increased their fame after receiving an Akita after Russia’s donations towards the 2011 Earthquake and Tsunami Relief Effort.

Akita Prefecture has tourist facilities and festivals all created for the beloved Akita Inu.

Visit the Akita Inu Museum with Japan’s most famous breed in Odate, Akita Prefecture. The museum was constructed by the Akita Inuhozonkai (Akita Preservation Society) on the 50th anniversary of its establishment. It is the only museum in Japan that is based around a Japanese dog breed. At the museum, you can learn more about the history of the Akita Inu and the story of Hachiko, since this museum is located in his home town Odate. Of course, you can't mention the museum without mentioning outside of the building, as there is a real Akita Inu that you can pet and see!

Also in Odate, there is Roken Shrine, which was built to appease the spirit of a legendary Akita called Shiro, who failed to save his master, Sadaroku, from a neighboring domain who had arrested him.

In Yuzawa, Akita, the Inukko Festival has ice statues that are carved like standing Akitas and are displayed around town. Talismans called inukko are placed inside. The ropes around the necks of the statues symbolize in Shintoism that each are sacred. Many visitors bring their pets (of course many of them Akitas too)!

Amekko-ichi festival in Odate has a 400 year history and is the largest winter event in the Akita and northern region of Japan. This festival has stands of sweets that are said to ward off illness. The festival funnily takes place on Hachiko street. In this festival, there is also a parade of Akita Inu led by the Akita Inuhozonkai. This is the same society that helped make the Akita Inu become a national monument in 1931.

Whether you visit in the spring, summer, winter, or fall, Akita Prefecture will delight you with its unique breed of dog and fascinating history. 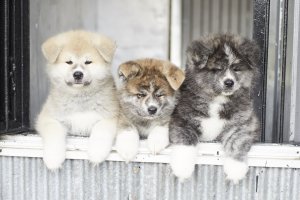 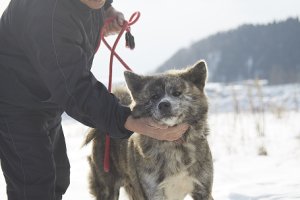 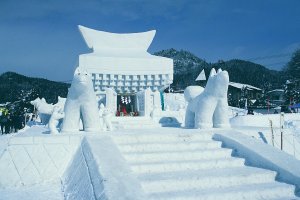 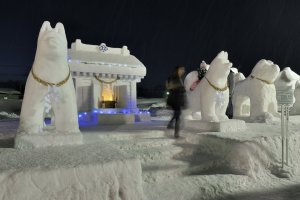 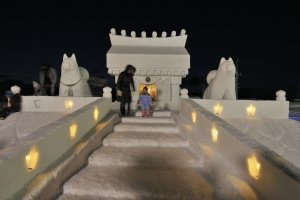 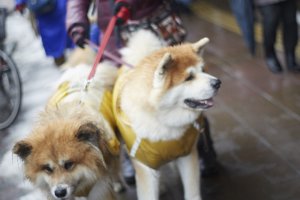 Jessica A Paje 4 years ago
I agree - the cover photo is so adorable! I love Akita breed, especially the story behind Hachiko.
Reply Show all 0 replies