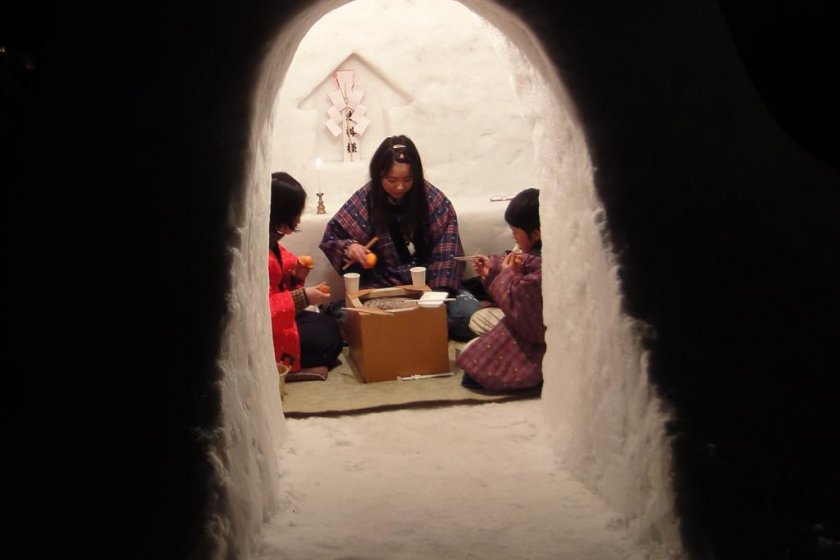 Enjoy warm hospitality in the snow & honor the spirits!

Snug in the snow

In the afternoon after visiting Kakunodate, I traveled to Yokote which is another small town close to Akita where they have a unique and picturesque tradition. There is annual festival of making igloos – know in Japanese as Kamakura - from snow every February, these are large enough for a few people to sit inside, around a small fireplace, and have a small shrine carved into the frozen wall to honor the water spirits at the back.

They hope that by inviting a stranger into these small temporary houses and offering them a piece of toasted mochi rice cake, and some warmed amakaze sweet rice wine, that the water spirits will reward them with plentiful rains in the spring for the new rice harvest. Akita Prefecture seems to grow a lot of rice, and every flat bit of ground seems to be a plantation of neat parallel rows, all trimmed short and covered with snow at the moment.

Much of the igloo building and hosting is done by children and teens and the local school also has a sea of mini-kamakura on the lawn outside and at night these were lit with their own candle and as soon as it got dark their larger versions were teeming with people keen to get a free snack. There is a real buzz in the streets and lots of young people seem to really enjoy the festival as a chance to get together and chat and hang out all evening in the depth of winter in the relative warmth of the igloos.

There was a small street that had about 15 kamakura together, and there were a few other snow sculptures, including some wonderful grinning totoros, and a small square that had been walled in with snow lights.

Most kamakura had a queue of people waiting for them, so I just took photos and went to a nearby restaurant for my dinner. I found a place that did a Sichuan style hot pot thing, with a lamb and seafood, where you sat, shoeless, in your own private room with a blind and your feet poking down under the table where there was a nice little heater, similar to a kotatsu. It was excellent.

Don't worry if you want make it for February - you can still see an igloo at the Yokote Kamakura Museum. 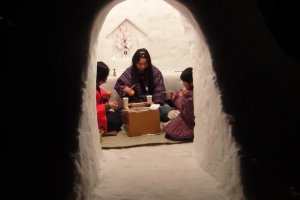 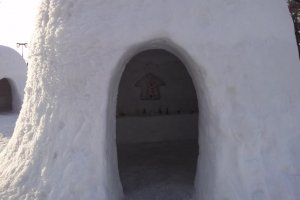 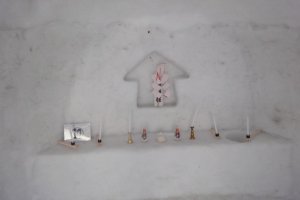 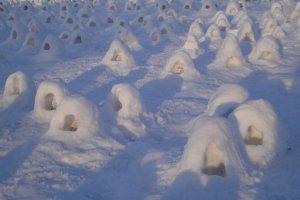 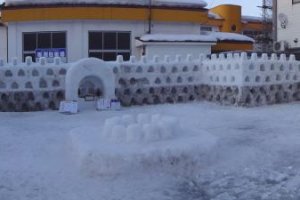 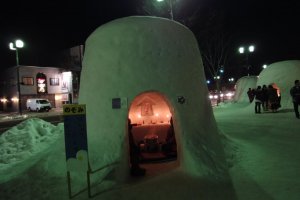 Kim 2 years ago
I really want to try and head up there for this festival - it looks incredible!
Reply Show all 0 replies
1 comment in total