One of Akita Prefecture’s local foods is Yakisoba. Just imagine fried thick, square chopped wheat noodles with cabbage and ground pork, garnished with pickled vegetables in soy sauce and topped with a half-fried egg. Mouth watering! If you’re traveling around Akita Prefecture, I would suggest drop in at Yokote and make a quick-yakisoba-stop at Kuidoraku. You won’t regret it!

A four times Yokote-Yakisoba Grand Prix (a local event dedicated to yakisoba) winner from 2007-2011, Kuidoraku is only 6 minutes away from the JR East Yokote train station. Kuidoraku, is a small izakaya (tavern) that serves amazing food to its customers. The menu includes a great variety of choices including yakitori and ramen, but the reason I went there was to try out their popular yakisoba.

"Izakaya Kuidoraku, is famous among the locals as it has previously won the Yokote-Yakisoba Grand Prix. It serves good food and is a great place to go on a night out in Yokote city."

I ordered the ushibara yakisoba that apart from the main ingredients (noodles, meat, vegetables, pickles and sauce) also included a special ingredient - apple! The fruit gave an interesting sweet touch to the taste of the yakisoba. In addition to the dish that you order, the helpful staff will also serve you warm soup and pickles.

As you can see from the photos, the interior consists of a counter as well as low dining tables, very typical in Japan.

Ichiro-san, the owner of Izakaya Kuidoraku is a figure that you can easily spot in the shop and that’s because of all the posters with his Yokote-Yakisoba Grand Prix achievements. However, he keeps a very low profile, takes your order and immediately disappears inside the kitchen to start preparing the food. 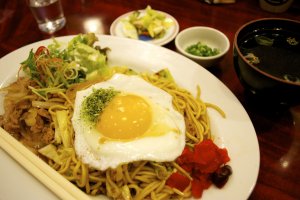 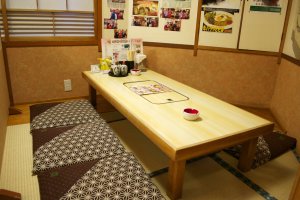 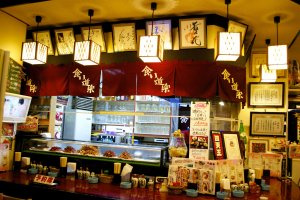 Elena Lisina 3 years ago
I'd definitely enjoy it! Thanks fr sharing!
Reply Show all 0 replies

JapanTravel Guest 6 years ago
I want to try such izakayas in Japan. This one looks cosy and the food looks good!
Reply Show all 0 replies

Christie Petrakopoulou Author 6 years ago
Hi Zeba! it was really delicious! It cost 800 yen which i think it was a bit over priced to be honest as you can find tasty yakisoba with a better price! :)
Reply Show all 0 replies

Bonson Lam 6 years ago
Apples to lighten up yakisoba.. what a great idea! It reminds me of Japanese curry which also uses apples to lighten and freshen up the taste and texture.
Reply Show all 1 replies

Christie Petrakopoulou Author 6 years ago
It was very interesting indeed! the best part is that you can't see any apple pieces since they have completely melted and become one with the rest of the ingredients!
Reply

Zeba Ahmed 6 years ago
OMG That sounds so delicious! How much did it cost you?