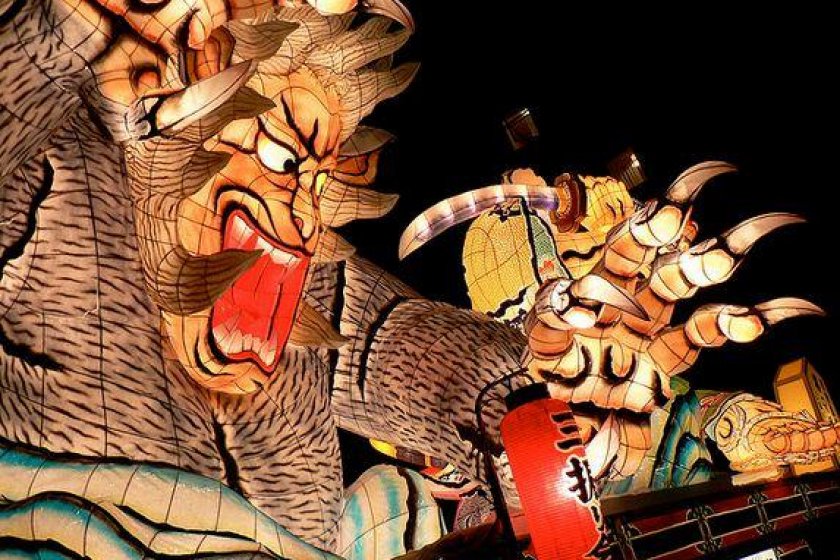 A close up photo shows the amazing detail that goes into the designs of each float. (Photo: ChrisSteph LewisBoegemon)

Aomori prefecture may be best known for being Japan’s largest apple producer, but once a year, the streets come alive in the Nebuta Festival in Aomori City. Lesser known, but perhaps more impressive and memorable is the Tachineputa Festival in nearby Goshogawara. From a tourist’s perspective, this festival is great because it is less crowded and just as exciting. Since Goshogawara is just an hour’s drive away, it is easy to plan a trip to see both of these versions of Nebuta since the festivals occur during the same week.

Size really does matter in “Tachineputa.” The word “tachi” means standing in Japanese, but these floats don’t just stand, they tower above crowds and move! Standing an average of 20 meters into the air (yes, 20 meters!), you can often see the tops of the floats peaking above low lying buildings before they turn a corner in the parade route. Designs tend to focus on deities, demons, and Japanese folklore. Although you can come early in the afternoon to get a glimpse of the floats, the parade itself is at night. This means all the floats are glowing from the inside, bringing a festive mood wherever they wander. Since the floats are so tall and the parade route is long, you are guaranteed to get a great view almost anywhere along the street. But you’ll have to look down, not up, to see how these beasts on wheels actually move.

Sticking with tradition, floats are pulled and pushed throughout the weeklong festival. Dozens of human handlers pull ropes attached to the front end of the float, while the strongest members of each float are often stuck pushing and steering the floats from behind. This is no easy task. The floats weigh several tons or more. Oh, and did I mention the streets are incredibly narrow and lined with power lines? I recommend trying to find a corner along the parade route. From there you can see the precarious push, pull, and pivot motions teams need to perform in order to turn the floats. It gives you more time to take pictures and really see the fine detail and hard work that goes into each float. To keep floats in rhythm and to add to the festive nature, massive carts of drummers and dancers fill the gaps between the tachineputa.

Reaching Goshogawara to see the Tachineputa Festival is easy. It’s an hour’s drive from Aomori, and the event is just a five minute walk from Goshogawara station. From Tokyo, the travel time between bullet train and local train can take up to five hours, but it is definitely a must see if you’re in Japan during August. Local hotels are undoubtedly filled weeks or months prior to the event, but hotels just twenty to thirty minutes away can still have vacancy, so keep a look out. 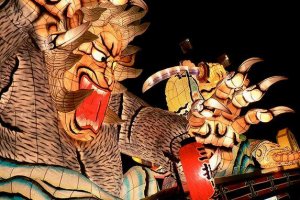 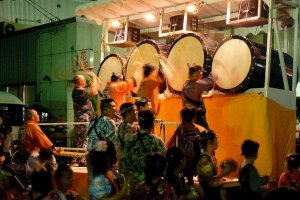 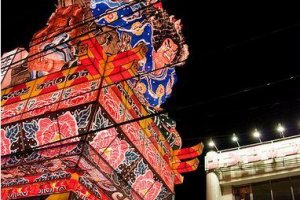 Elena Lisina 11 months ago
This festival sounds great! Thanks a lot for the information, Justin! Is it on the same dates each year?
Reply Show all 0 replies

Novia Mardasari a year ago
Omg, i’m so impressed.
all done by human power
Reply Show all 0 replies

Mandy Bartok 7 years ago
This is definitely going on my to-do list for my summer trip!
Reply Show all 0 replies
3 comments in total