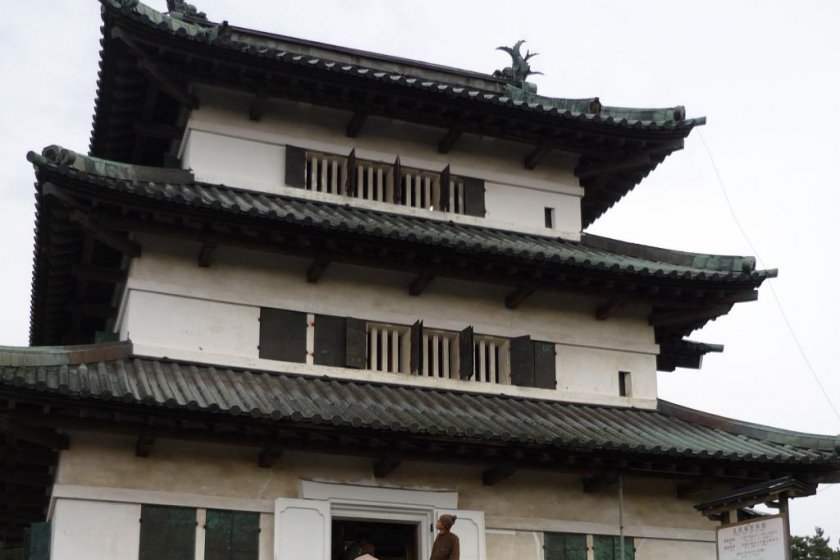 An enjoyable half day trip from Aomori city

Hirosaki is a former castle town located in the western region of Aomori Prefecture, known for its rich cultural and historical heritage. The Tsugaru clan built the original castle about four hundred years ago around which the town developed. Nowadays the former castle grounds have been transformed into the large, public Hirosaki Park which, with its castle relics, gardens, shrine and cherry blossoms, is definitely worth a visit!

We had made our way up to Aomori from Sendai early in the morning and since it was raining a fair bit, we spent the first half of the day at the Aomori Prefectural Art Museum. Once we had returned to Aomori station, it was still only around 1:30 pm and so we decided that we’d spend the rest of the day at Hirosaki.

Aomori and Hirosaki are connected by relatively frequent trains and the journey takes between thirty and fifty minutes. After quickly ducking into a convenience store to buy lunch, we used our Japan Rail Passes to book the next train. We were lucky enough to get a “Resort Shirakami” train which features big comfortable seats with heaps of legroom as well as tall, wide and clear windows to look out of. During the train ride we ate lunch and watched the pretty wet countryside scenery zip by; we could see lots of apple trees which are a specialty of Hirosaki.

The attractions in Hirosaki are a little spread out, but thankfully there are a number of buses available. The Dotemachi Loop line is a convenient tourist route that connects the station to Hirosaki Park and upon arriving we went to the tourist information office to ask where the stop was. It was pretty funny as it was a small office but there were five people crowded behind the desk and they all eagerly tried to answer at once. The stop was located nearby and since a bus comes every 10 minutes we didn't have to wait long. We wanted the “Shiyakusho-Mae” as it is located near the park's main entrance.

After alighting from the bus we made our way through Hirosaki Park to the centre where the castle keep is located. This keep was originally built in 1611 but burnt down 16 years later after being smote by lightning. Another 200 years passed until it was rebuilt in 1810. This means that while technically a reconstruction, it’s actually quite old and historical in its own right.

Before we could go into the area containing the keep we had to buy an admission ticket. There was a deal that let you get admission tickets to the castle, as well as the nearby Botanical and Fujita gardens. This deal was even better value with the Northern Tohoku Welcome Card, which is available to foreign tourists and provides a variety of discounts in the Tohoku region. To get it all you have to fill in some details on their website and print it out. While there was a sign at the booth about the card, the ticket lady was still really suspicious of ours. This was probably due to the dodgy state of our black and white folded paper 'cards'.

Once we bought our ticket, we walked over to the castle and went inside. The interior was full of a large amount of castley things like amour and other artifacts and we could climb up a series of narrow stairs to the top. The inside did not look anywhere near as modern as some other reconstructions and I particularly enjoyed looking out of the narrow windows at the top.

After the castle we spent some time exploring the rest of the park. Many locations offered great views of Mount Iwaki which is a nearby andesitic stratovolcano, and a nice backdrop for photos.

Hirosaki Park is a very popular location for cherry blossom viewing and from looking at photos of the area during spring I can see why — the trees are an explosion of pink. Since it was mid-autumn none of the cherry blossoms were blooming however we still went and had a look at a popular flower-viewing location known as Sakura Grove. This line of trees near a river becomes a tunnel of pink when the flowers bloom in April. It was a nice tunnel of green when we walked along it. As it was getting a bit late by this time and we still hadn’t visited the two gardens we’d paid for earlier, we rushed over to the other side of the park to the Botanical Gardens. 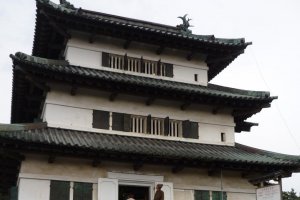 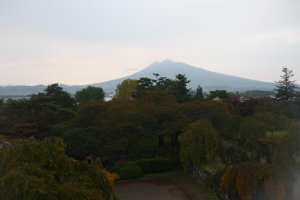 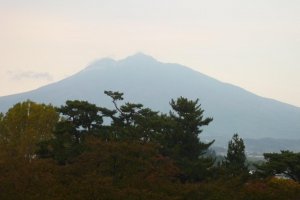