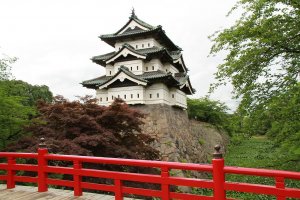 Hirosaki Castle, completed in 1611 by the Tsugaru clan, is located in Aomori Prefecture and is a particularly worthwhile excursion destination, especially during the cherry blossom season.

Originally the tower was a 5-story building, but after a lightning strike it burned down to its foundation walls. A law at the time said that the tower could not be rebuilt in its original form, so that the tower was rebuilt as a three-story tower, as can still be seen today.

The tower of Hirosaki is the only castle tower in the Tohoku region, which was rebuilt in the Edo period and it is considered a symbol of the city of Hirosaki.

The first cherry trees in Hirosaki Park were planted about 300 years ago. Here visitors also have the opportunity to marvel at the scenery from a boat or to admire the evening illuminations.

Hirosaki Park, with its castle relics, gardens, shrine and cherry blossoms, is definitely worth a visit!

Tall somei-yoshino trees form tunnels of pink flowers above your head and fill the moats at your feet with petals, while breezes..

The History of Hirosaki Castle

As a castle town, Hirosaki was built around this defensive structure and status symbol - today a tower sat in an extensive compound..

A Day at Hirosaki Castle Park

Hirosaki Castle to be Relocated

Hirosaki Castle in Aomori Prefecture is to be relocated in 2015 to begin a ten year repair project of the castle walls.

Hirosaki in Aomori Prefecture is known for its Cherry Blossom Festival held in the park surrounding Hirosaki Castle.

This Naked x Hirosaki Castle collab is sure to get you in the mood for warm sweaters, hot chocolate, and all things autumn.

In the historic town of Hirosaki in Japan's Aomori prefecture, Ishiba Ryokan is a traditional family-run guesthouse, close to..

In historic Hirosaki in Japan's Aomori prefecture, Route Inn Hirosaki Ekimae is a good value business hotel by the city..

Art Hotel Hirosaki City is a perfect choice as your place to stay while on a business trip or holiday in Aomori Prefecture. With..

In the centre of Hirosaki in Japan's Aomori prefecture, Anzu is an atmospheric old izakaya where you can listen to traditi..

In Hirosaki in Japan's Aomori prefecture, Lemon Cafe is a great place to relax over a slice of cake or light meal, with a peaceful..

Inakadate in Aomori Prefecture is famous for its stunning and intricate rice paddy art. What began in 1993 with purple and yellow rice plants forming..

The Hirosaki Cherry Blossom Festival takes place at the Hirosaki Castle Park each year between April 23rd and May 3rd. Regarde..

A quick visit to the fun and cute Hirosaki City Botanical gardens in Hirosaki Park.