Discover a side of washoku you may have never seen before

Japanese food is admired around the world, comprising a sheer variety of dishes and cooking techniques that have garnered wide attention around the world. Why not go beyond the pop-culture image of sushi, ramen and tempura to learn more about Japan’s cuisine up close? Doing so reveals a revered dedication to food that spans seasons, regions, and communities to such an extent it has given rise to a smorgasbord of signature, local flavors.

Look back to 2013, when Washoku, or traditional Japanese cuisine, became officially recognized as a UNESCO Intangible Cultural Heritage. From the seasonal traditions associated with eating at different times of the year—like osechi around Japan’s New Year period—Washoku’s deep-seated respect for nature and emphasis on (and strengthening of) community ties helped put the spotlight on Japanese cuisine in a new way.

However, Washoku’s cornerstone in modern Japanese cooking would not be assured without Japanese society’s efforts to preserve its traditions, from passing down techniques between generations or committing to seasonal customs.

But in our fast-moving times where your next meal could be an Uber Eats order away, nothing can be taken for granted and, considering the idea of preserving local food traditions up and down the country at scale, it might be considered a miracle if any of the smaller, lesser-known flavors don’t eventually disappear. Step forward Our Regional Cuisines, a website originally set up in 2020 (initially in Japanese only) to help create a long-lasting collection of Japan’s regional cuisines, including information on their origin, their history, sample recipes, and also ties to the local region. In 2022, the website (officially titled ‘Our Regional Cuisines: Beloved tastes and flavors we want to pass on to the next generation’) has been expanded with better multilingual support making it possible to learn about Japan’s regional cuisines in English, Chinese (Simplified & Traditional), Spanish and Thai.

Thanks to government funding and support from the Ministry of Agriculture, Forestry and Fisheries (MAFF), it is hoped washoku’s diverse culture will be not only preserved but more seamlessly passed on to younger generations.

We know Japan’s cuisine is loved around the world. As reported by Nikkei, MAFF’s 2020 report put the number at 156,000 in Asia alone — a 6.5 times increase since 2006. The same survey saw double-digit growth in North America, Latin America and Oceania too. Forbes also reported on government data from 2017 showing rice exports hitting new highs and further evidence of a Japanese food boom coming off the back of washoku’s new recognition. Look back to a 2019 Japan Tourism Agency survey for evidence that 69.7% of foreign visitors were most interested in eating traditional Japanese food.

It stands to reason that the Japanese food boom presents an incredible opportunity to shift the spotlight onto some of Japan’s lesser-known foods and delicacies. And we don’t just mean the weird but familiar ones like natto, horse meat sashimi, or raw egg… but actual dishes unique to areas with their own story, culture, and authentic provenance. Foods that are a part of the local community, that rely on local ingredients grown with local techniques.

Hungry yet? Let’s go on a journey to discover some of these regional cuisines and learn more about the kind of dishes to be featured on Our Regional Cuisines.

Around Japan: North to South

Ishikari hot pot is a local cuisine of Hokkaido and derives its name from a town and river famous for its salmon fishing that dates back from the Edo Period (1603–1868). Fishermen would be rewarded for a successful catch with their salmon that would make its way into a nabe pot alongside onions, radish, cabbage, and miso. Meanwhile, Ishikari Town’s seine fishing attracted tourists to the region who would then try this local delicacy — giving rise to its popularity.

It might be worth trying alongside Sekihan (rice cooked with beans), another dish that is made from sweet amanatto and gained popularity in Hokkaido. If you’re able to reach Ishikari, head to some regional izakaya to try this local, famous dish.

Pacific cod is a winter delicacy in the Shonai region, where it is known as “Kandara” (cold cod) and caught during the coldest season of January to February. While it can be prepared and enjoyed in many ways, Dongara Jiru (cod soup) or Kandara Soup is particularly popular in the Sakata and Tsuruoka Cities of Shonai, which faces the Sea of Japan. Dongara Jiru is originally enjoyed by fishermen on the beach and sees the whole cod used from head to tail (including milt and bones) which is simmered with miso, green onions, and seaweed. Try this winter soup at one of many izakayas in Sakata or Tsuruoka (a UNESCO Creative City of Gastronomy), or visit during January’s Kandara Matsuri for even more opportunities to try.

If you are passing through the Kansai region take a trip to the Tango peninsula, beyond Amanohasidate, north of Kyoto. Here you’ll find local mackerel dishes preserved in a variety of ways, including salted, pickled, and grilled.

During the Nara Period (710-794), the route from nearby Wakasa Bay to the capital of Kyoto was known as Mackerel Road (Saba Kaido) and used for overland transportation of fish — so it was essential for products like mackerel to be preserved to last the journey.

This led to the emergence of local dishes along the way using mackerel — perhaps the most colorful being Barazushi (or Tango Barazushi). Grilled, minced mackerel joins toppings of shiitake mushroom, egg, kamaboko and bamboo shoots on top of sushi rice molded in a square, wooden Matsubata box.

Bonito (katsuo) is so popular in Kochi it was designated the prefectural fish since 1988 and is eaten on a daily basis by many. Bonito-tataki is perhaps the most popular way to serve it — the Bonito is coated in salt and then seared on a grill over rice straw, which lends a unique flavor. The searing was originally a preservation technique to provide fishermen with food when out on their boats, but other theories as to its origin exist, such as Chosokabe Motochika (warlord of Tosa Province) preferring half-roasted bonito or Kazutoyo Yamauchi (lord of Tosa domain) outlawing the consumption of raw bonito due to hygiene concerns.

Theories aside, these days it is a popular izakaya dish and served throughout Kochi prefecture. Expect to receive it sliced alongside garlic, green onions, myoga ginger and shiso leaves.

Gane is a Kagoshima dish that is made from one of its biggest exports — sweet potatoes. Kagoshima came to be Japan’s leading producer of sweet potatoes as it found success with a crop both easy to cultivate in a mild Kyushu climate yet resilient to frequent typhoons.

Kagoshima is home to many local dishes that use sweet potatoes and they are an indispensable ingredient in Kagoshima's daily life.

Gane involves thick strips of sweet potato and vegetables dipped into batter then fried, deriving its name from its similarity to the appearance of a crab (“kani” in Japanese—or “gane” in Kagoshima dialect).

For your next Japan trip

We hope we’ve given you food for thought with regard to your next visit to Japan and helped redefine the idea of what washoku is and how diverse it is. Our Regional Cuisine currently has 285 local foods covered in detail on their website, so you’ll never run out of culinary inspiration no matter what part of Japan is on your bucket list.

As above, we recommend trying to experience the local food culture and learning about local dishes, through eating or buying them. Supporting local culture is not just a tenet of sustainable travel but will also surely be one small way to help preserve interest in these dishes.

Supported by Savor Japan and JCD 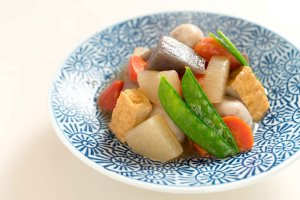 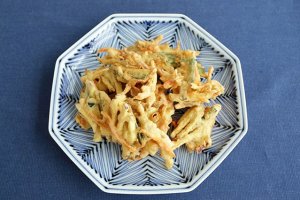 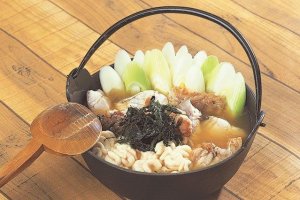 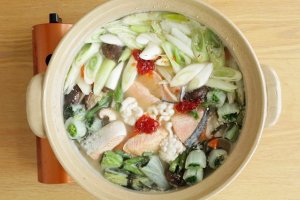 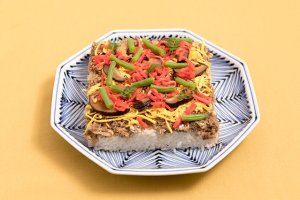 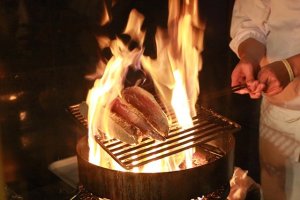