You may wonder why a country with such strong ties to Buddhism considers vegetarianism such an unusual idea. Historical references to life in early Japan describe how man hunted meat for survival, and the ancient rulers enjoyed hunting for sport. In AD 538 Buddhism was introduced to the Japanese Emperor Kimmei by the rulers of Baekje, a kingdom in Korea. There was a great deal of dispute and discussion over whether a foreign religion should be accepted, given the Japanese traditional Shinto beliefs.

In AD 593 Prince Shotoku,a devout Buddhist, was appointed Prince Regent to his Aunt, Empress Suiko. He declared Buddhism the official religion of Japan in the belief it could unify and benefit the country. Seven short-lived Emperors and Empresses later, Tenmu became Emperor, and, within three years of his enthronement, had banned the consumption of meat based on his Buddhist beliefs that humans could be reborn as animals. The consumption of fish was not made illegal, though was still frowned upon by Buddhist teachings.

The Asuka period of AD552 to AD645 saw the introduction of milk and dairy products to Japan, and with this came the first farms and grazing land was established across the country. A particular favourite of the time was Daigo, a cheese-like product made from curdled milk. But even with the increased farming, eating meat was still illegal. In the Kamakura period of AD1185 to AD1333 the penalty for those who consumed meat was 100 days of fasting.

The reintroduction of meat came with the first foreign people to travel to the country. Christian missionaries from Portugal and the Netherlands brought their own customs and local diets, the Portuguese, for example, introducing Tempura to Japan (which has remained popular to this day). The lords of Southern Japan embraced Christianity and began eating pork and beef. Gradually, with the emergence of Christianity as a popular religion, the consumption of meat grew in popularity.

The Buddhist set of beliefs was re-established in Japan in 1615 with the founding of the Tokugawa Shogunate, the last feudal Japanese military government. The 5th shogun re-instated the ban on eating meat in 1687. This time, not only the consumption of meat, but also the killing of animals was made illegal. However, Japanese hunters continued to rebel against the laws - living in villages atop the mountains and selling meat to local people and within town markets. In 1760 in the Kojimachi district of Edo (old Tokyo) there were a number of shops selling animal meat (for example deer, otter and boar). Under the 8th Shogun Tokugawa Yoshumune, milk and dairy products were consumed once again following the gift of 3 white Indian cows by the Dutch in 1727. The number of cows grew quickly, and by the Meiji Restoration in 1868 there were over 500 in Japan.

With trade and business relationships growing with the West, Emperor Meiji organized a New Year's Party in 1872 to impress his foreign friends and associates. Meat was eaten in public for the first time in over 1000 years. A public report announced that the Emperor enjoyed beef dishes, and it became customary to entertain Westerners with dinners of French cuisine. Upon seeing their emperor eating meat, the taboo against its consumption was gone. In the aftermath of the Second World War, Western cuisine was seen as a sign of modernization and its popularity continued to spread. Some observers also blame post World War 2, 'Government Brainwashing' for the increased promotion popularity of meat, which has led the country to where it is today.

Gradually – very gradually – vegetarianism is on the rise. Perhaps it’s down the Western influences, or maybe increased awareness of animal rights? But more vegetarian-friendly restaurants and cafes are popping up, and more nonveggie establishments may start to offer vegetarian options. It’s still a struggle of course, but a sign that things are improving. The word ‘Vegetarian’ seems to cause confusion – many Japanese people do not understand what it means. Too many times I have heard stories of waiters saying things like “ Vegetarian? But you still eat chicken right?” or “fish is ok though?” The majority of meals that you think are vegetarian, which surely must be vegetarian, are probably served in fish stock or sprinkled with bonito shavings. A lot of vegetarians living or visiting Japan will say that there is no way around it, it’s eat fish or eat nothing. It isn’t always possible, but the best thing you can do is track down the Vegetarian/Vegan exclusive eateries and give them your support – the more popular they are the more chance they will stick around and spread through the country. Remember! Saishoku shugi-sha desu! (I am vegetarian!) 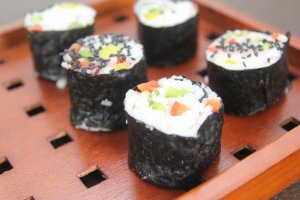 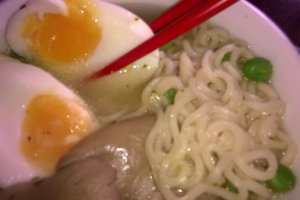 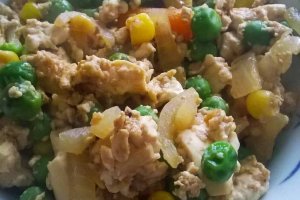 Geraldine Buergel 2 years ago
I didn't know Japan had such an interesting history on vegetarianism! 100 days of fasting as punishment for eating meat sure sounds rough...
Reply Show all 0 replies

Malcome Larcens 6 years ago
Good article, my advice is ask every time. At least I eat fish so I have a few more options. I ate ramen only once, they said it was fish stock but it was beef, I felt terrible after, they think we can't tell the difference. I was a cook for 20 years just looking at a dish I can tell. I'm fortunate that 90-95% of what I eat is my own food but food labeling is inaccurate at best. In my early days I got disappointed so many times, looking at menu items and there was no meat items listed but when I got the food there was ham or bacon in it. Now I ask specifically every time. For some reason most people think that meat only refers to beef, so it could have ham, bacon, pork, chicken and be called vegetarian.
Reply Show all 0 replies

Rashaad Jorden 6 years ago
I survived as a vegetarian in Yamagata Prefecture. Occasionally, my school would prepare specialized vegetarian meals for me (I was a member of the JET Program). I did find a super delicious vegetarian restaurant - or one that served vegetarian food in Tsuruoka. I remember buying a book full of vegetarian recipes and restaurants in Japan that was a bible to me.
Reply Show all 0 replies
3 comments in total