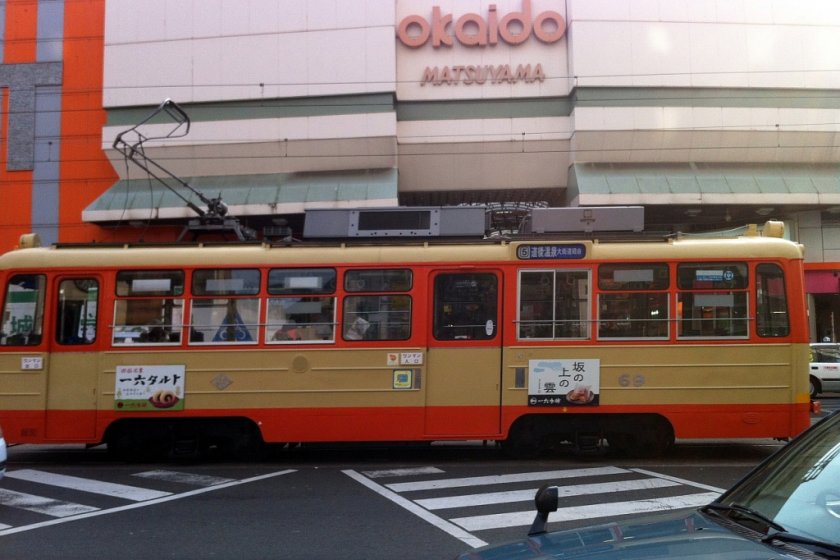 Find something right up your street

A tram rattles out from the Okaido stop

The Okaido Shopping Arcade runs in a straight line from the street known as Ichibancho to Chifunemachi Dori in the center of Matsuyama. Okaido means “big street” and indeed it is a broad, light and airy space. While many shopping arcades in Japan are experiencing hard times, with lots of stores shuttered, Okaido is a lively place with a good balance of shops, old and new, with places for eating too. I’ve walked along Okaido even at 3 o’clock in the morning and found it full of people, entertained by an excellent selection of busker talent.

Near the Ichibancho end of the arcade is the grandiose entrance to the Mitsukoshi department store. This is one of the larger and more prestigious establishments on the arcade. There’s enough in Mitsukoshi to fill an afternoon or longer. But there are many smaller stores on the arcade itself that have been there for a very long time, surviving because they offer quality goods with pleasant service. One of my favorite stores sells hats. They’re not cheap, but they stock just about every kind you’ve ever heard of. This is a very old-school hatters, but you can find hats in any number of hipper establishments along the Okaido. As you head on down the arcade, you’ll notice that many of the shops are double-decker – in many cases, there’s an altogether different store on the second floor, or a restaurant, up a narrow flight of steps.

The restaurants include a vegetarian café, a very good Nepalese restaurant, and noodle shops. There’s also a McDonalds and a Yoshinoya. This is not to mention the enormous range of bars and restaurants arrayed along the streets that lead off the arcade.

To keep things interesting, there are events held throughout the year in the Okaido. Flea markets are held at irregular intervals (shown on the webpage) and in July, every Saturday is the yoichi, the night market. From late afternoon, stalls are set up in the arcade offering everything from snacks and beer to wood crafts and rhinoceros beetles. The people of Matsuyama enjoy wearing yukata, and the doyo yoichi is just another opportunity to display oneself in traditional finery. For three days in August, a very large dance parade passes through the arcade.

When you get to the end of Okaido and cross Chifunemachi Dori, you find yourself at the entrance to yet another arcade, the different yet equally appealing Gintengai, the Street of Silvery Heaven.

Besides the shops and eateries on the continuous arcades Gintengai and Okaido, there are many more options for shopping and eating on the streets to either side of the arcade. There are few shopping arcades in Japan that are as vibrant and thriving as these, so they represent a great opportunity to see the best of Japan’s retail tradition. 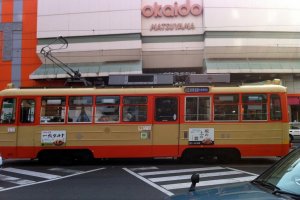 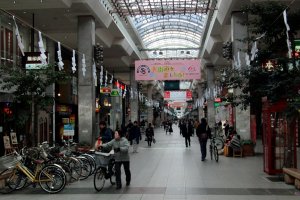 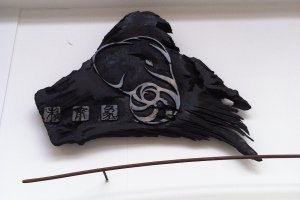