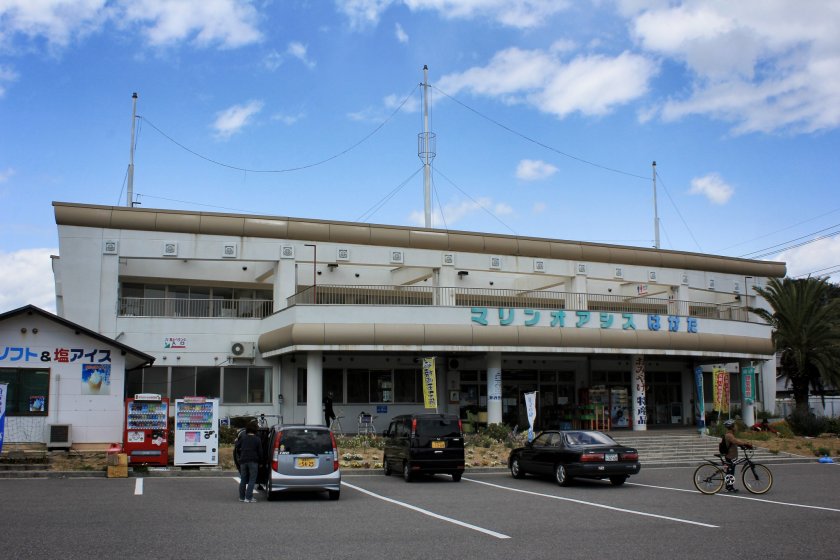 The Shimanami Kaido is a highway that crosses the Seto Inland Sea between the prefectures of Ehime and Hiroshima. Spectacular bridges straddle the sea passages between a string of islands ranged conveniently between the larger islands of Shikoku and Honshu. This is a truly amazing route, whether for drivers or cyclists. The highway is fascinating in itself, and the constantly changing views of the sea and mountains are like nowhere else. At some point though, you’ll need to stop for a break, and Hakatajima Michi no Eki on the island of Hakatajima was made for that purpose.

Michi no Eki or Road Stations are government-designated rest areas found along roads and highways in Japan. Besides providing places for travelers to rest, they’re also intended to promote local tourism and trade. Shops sell local produce, snacks, souvenirs, and other goods. Not surprisingly, being in the middle of the Seto Inland Sea, this Road Station has a preponderance of fish and other marine products. I drove to Hakatajima from the Ehime side in early spring, and found the Hakatajima Road Station nearly opposite the down ramp from the highway. Its official name is Hakata SC Park, and it does stand in a park of sorts. There’s a paved apron with a row of palm trees that encloses a crescent-shaped sandy beach. In the near distance is the bridge to Omishima. This is a popular place to swim in the warmer months.

Hakatajima has a long history of producing salt, and one of the specialties of the Road Station is salt-flavoured ice cream. Don’t ask me how it tastes because the whole concept makes me wince, but it’s said to be very good.

Hakata SC Park appears to be one of the older Road Stations, built at a time before they started to become really stylish with a distinctive local ambience. Nevertheless, it has clean toilets, a good range of products, a reasonably-priced restaurant and a little tourist information corner, although everything is in Japanese. That said, the map of the island is very visual, and a useful aid even if you can’t read Japanese.

Cyclists are much in evidence, and even if you go by car, you can park and rent a bike. 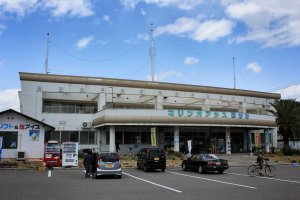 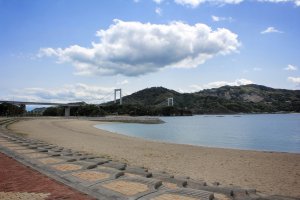 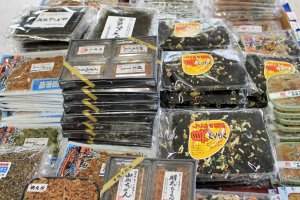