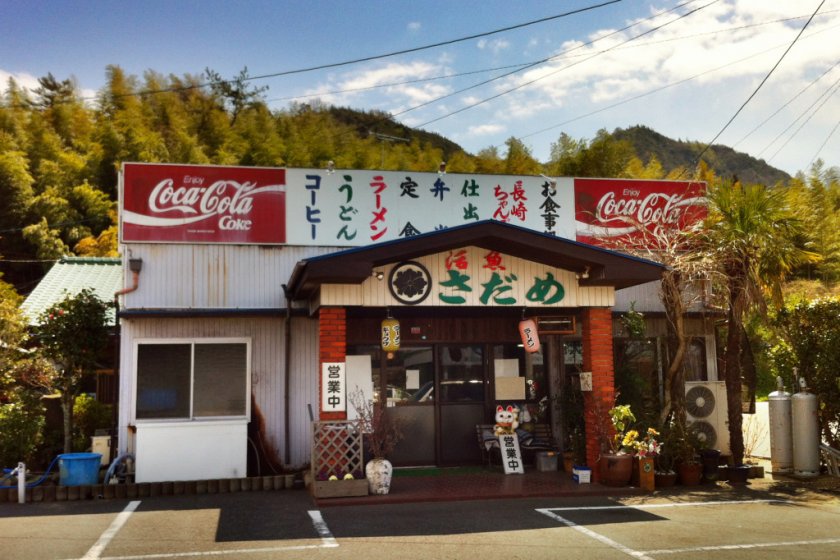 An island eatery with a wide menu specializing in fish

In early April, I rented a bicycle and headed off over the first bridge on the Shimanami Kaido to explore the island of Oshima. The Shimanami Kaido is a series of islands, linked by some fairly spectacular suspension bridges, which stretches from Imabari in Ehime to Onomichi in Hiroshima prefecture.

I took the train from Matsuyama to Hashihama, walked to Sunrise Itoyama, the Imabari city cycling terminal at the end of the bridge, and rented a bicycle. After cycling over the bridges spanning the Kurushima Channel, getting off the highway at Oshima, and making my way to the middle of the island, I was well and truly ready for some lunch. Fortunately, I was in the middle of a little town when the 12 o’clock chime struck, and right there was a restaurant called Sadame, all emblazoned with Coca-Cola signs and lanterns marked ‘ramen’, a common enough sight, but a truly bizarre combination to my mind.

More attractive to me was a handwritten sign by the roadside advertising a sashimi lunch set. Since I was on an island with sea all around, it seemed only fitting to eat some fish. I went in and was greeted pleasantly by the master, who directed me to a menu consisting of wooden plaques, each inked with a different item, hanging on a wall. I chose the seafood donburi for 1,200 yen and ordered a glass of sake for good measure.

I didn’t have long to wait before the food arrived, but in the interval, I gazed around the establishment. It seemed utterly typical of a diner on a small island, with all sorts of random decorations including golf trophies, posters of enka singers, goldfish and Shinto symbols. There was also a kamidana Shinto shrine high up in a corner under the ceiling, and wanted posters for the Aum Shinrikyo criminals. A sprig of deep pink cherry blossom sat in a bottle on the counter, and behind me was a bubbling tank of fish, for eats rather than for decoration. I’ve grown to love this kind of place.

The meal was excellent—a lot of very fresh sashimi, ikura fish eggs and boiled octopus on a bowl of rice, with carefully prepared miso soup, pickles, tofu and a slice of orange. The sake was not a special marque, but it complemented the fish beautifully. Soon, several other customers entered and ordered some of the cheaper options from the extensive menu. If you’re on Oshima at lunchtime, Sadame would seem to have everything you might need. 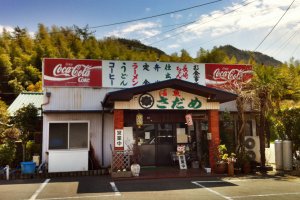 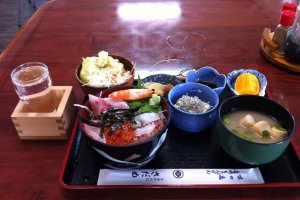 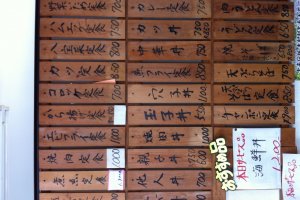