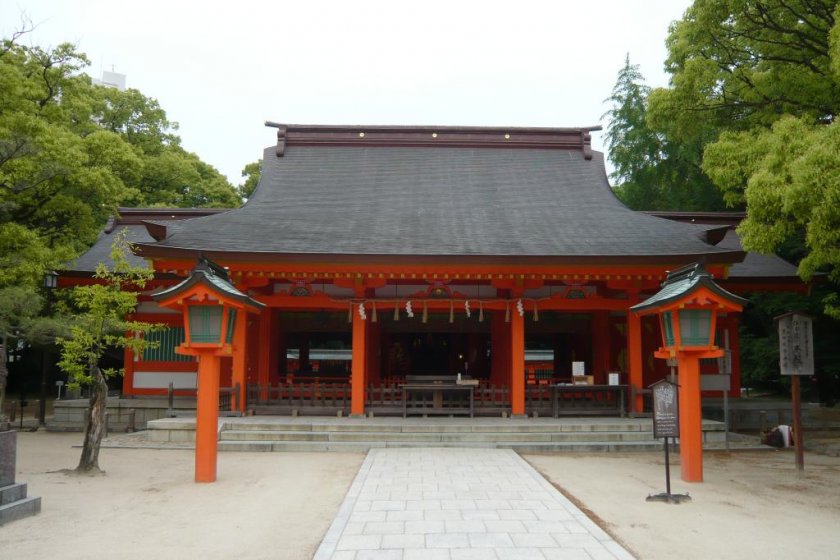 A shrine for sea-faring located in Fukuoka

Sumiyoshi Shrine is a shrine dedicated to safe travel by sea. Officials and travelers going from Yamato to Korea and China would visit the main shrine, Sumiyoshi Taisha, in Naniwa (Osaka) as a start of their pilgrimage. The travelers would then visit other Sumiyoshi Shrines along the Seto Inland Sea until their departure from the port at Hakata. This shrine at Hakata would be the last shrine they prayed at before they left land.

In ancient times, this shrine was ranked as one the highest shrines. It was noted as one of the greatest shrines in the Chikuzen area (present day Fukuoka prefecture). The area surrounding the shrine was originally a cape at the mouth of Nakagawa River as it entered into Hakata bay.

The shrine is dedicated to the gods (kami) of Sokotsutsuo-no-kami, Nakatsutsuo-no-kami and Uwatsutsuo-no-kami. These kami are associated with safe sea faring. Legendary Empress Jingu is now enshrined here as legend tells of the oracles the Empress received from the Sumiyoshi-kami before her conquest of Korea in the 2nd century. There is no record of this conquest ever happening; it is most likely an embellishment of the history of the Empress. The three kami originated from an undersea dragon king associated with other cultures. There are minor shrines to Amaterasu and Ebisu on the shrine grounds. Amaterasu is the goddess of the sun and Ebisu is the god of fishermen.

Although the shrine is home to gods worshipped for protecting travelers since ancient times, it became known for promoting Waka poetry since the middle ages. The main hall is a designated cultural property of importance. The site is also a source for designated national treasures including a copper axe and sword.

The main hall was rebuilt in 1623 by Kuroda Nagamasa, the first lord of the Fukuoka clan. The straight shaped roof of the main hall retains features of the ancient architectural style, in direct contrast to later Buddhist style halls. The shrine is home to a Noh theater with a classic stage setting which has been in use for Noh plays since it was built before World War II. The shrine is also home to a hoard of ancient documents that illustrate the history of the shrine and Hakata from the middles ages to the present day. 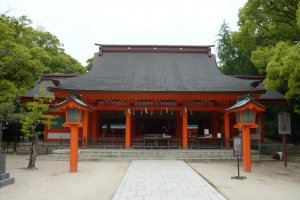 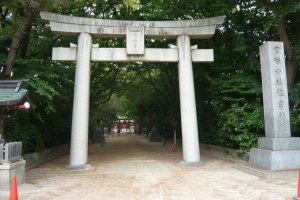 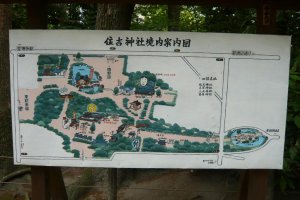 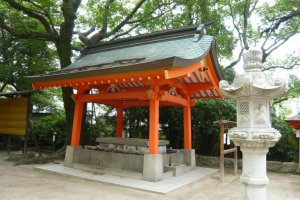 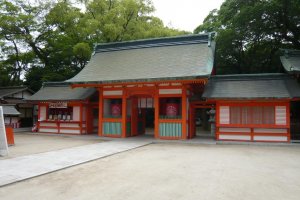 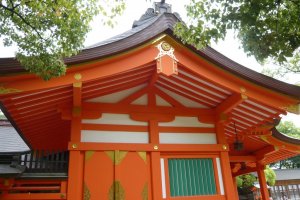