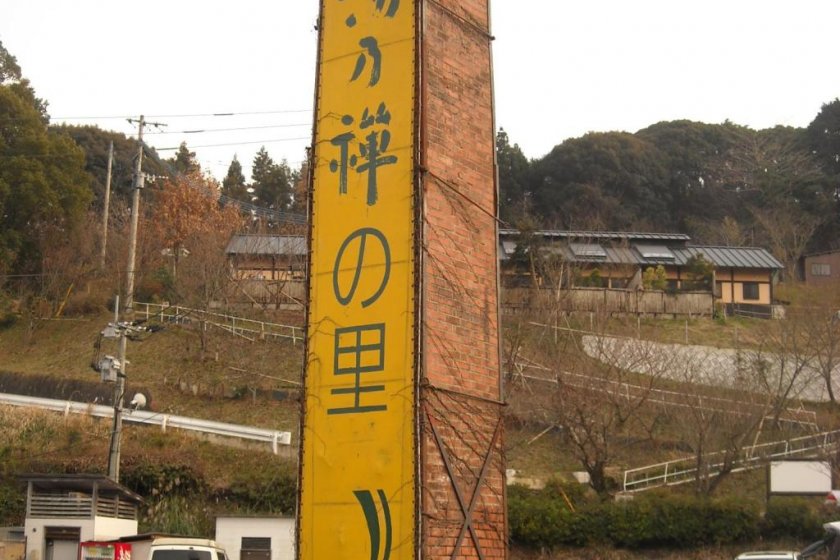 Yu no Zen no Sato Onsen

Atop a hill that overlooks the five other onsen in Wakita hot spring village, a tall, yellow brick sign boasts the name, Yu no Zen no Sato. With bus loads of day trippers swarming Nansuikaku Ryokan''s bathing facility, you may be a bit overwhelmed. But once you've circled the parking lot several times, watching a family pulling out like a lioness and pouncing on the newly opened space, a relaxing experience can still be had here.

I got into line and discovered that a vending machine is used for choosing your leisure – to bathe with the rest of the herd (￥800) or in privacy with your group (￥2300 for 60 minutes, 50 on weekends). A ticket is ejected, which you present at the counter in exchange for a locker key. You may also purchase towels here.
Next, I hunted for a locker – the only ones available were on the bottom, which meant I found my face a few inches away from exposed genitalia as I stuffed my winter coat and backpack in the locker. I adore the human body, and thus didn't mind much, but I can understand some one else being uncomfortable with this. In any case, the designers of Yu no Zen would've have done well to have made the dressing area more spacious. I washed, wrapped the cloth around my head, and was ready to slip into the carbonated mineral waters at last.
There were five different pool styles to choose from, and I soaked in all but the one kept at cooler temperatures. The pools were crowded with mothers and their excited toddlers and young women laughing with friends; instead of staring at those around me, I focused on the onsen's décor.
A beautiful screen depicting a couple, separate as we were from the opposite sex, graced the length of one wall under an awning. Bamboo plants were stifled in narrow glass containers, and moss and lichen sprung out of woven straw eaves, on stone steps, and at the base of torches. It appeared that nature was being beckoned into the place, but I'm not sure the gesture was successful.
Still hungry, my gaze fixed finally on the surrounding mountains, on treetops rendered animate by wind – this scene alone made the trip to Yu no Zen worth any trouble caused by its popularity. The view will easily enhance your already relaxed state.
After dressing, I met my companion for lunch. Again, we fumbled at a vending machine for our meal choices, then presented the tickets to two pleasant ladies in the kitchen who patiently conversed with us while preparing soba noodles with mountain potato. The fresh soba were also topped with seaweed, raw scallions, a bit of wasabi - delicious. We drank our tea in the small dining room decorated with twigs and branches – the attempt at drawing nature inside once more missing the mark. No matter. The food spoke for itself, was simple, refreshing.
Across from the Soba restaurant is a glassed-in eatery where you can grill your food with your friends and admire the lush mountains and valleys all around. It looks like a lot of fun! We would've tried it, but a soccer team was celebrating at every table there. Aside from these great places to eat, the Nansuikaku Ryokan offers banquet plans complete with seasonal menus to guests in their Japanese-style rooms. 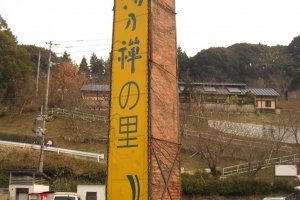 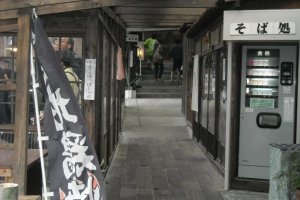 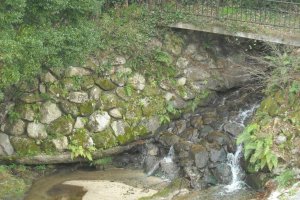