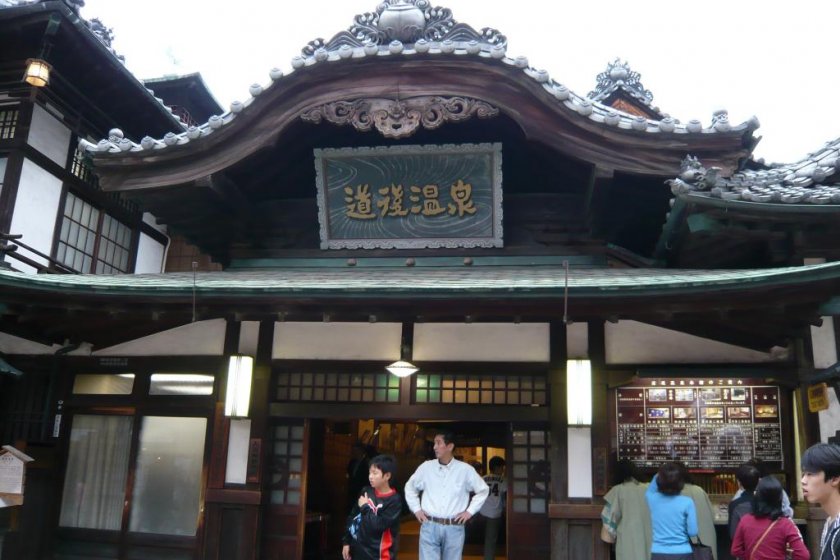 Having been to Matsuyama several times, and each time visiting the Dogo Onsen area, I was curious to visit the hot spring by myself and experience the waters of Japan’s oldest hot spring, or onsen in Japanese. Being a westerner and speaking little Japanese, I was a bit intimidated to go there by myself. Getting over that was a great experience.

I was told by my wife, who is from Matsuyama, that the onsen is popular with the Japanese who come to visit. And it is very popular. People pose in front of the entrance and have their pictures taken (and so did I). I was also told that the water is very hot. I still wanted to visit Japan’s oldest hot spring and experience it for myself.

When I first entered Dogo Onsen, I indicated what type of bath experience I wanted. There are two types of baths (each has one for men and one for women). One is called Kami-no-yu (Water of the Gods), which is a spacious public style bath. The other is called Tama-no-yu (Water of the Spirits), which is a more private and high grade bath. I choose the more private public bath (Tama-no-yu). Being a westerner, I was greeted with Japanese politeness (the staff at the onsen appreciate foreign guests).

After removing my shoes and placing them inside a locker, I was guided to the changing area. To get there, I walked down narrow corridors and climbed creaky, steep stairs. The dressing area is an open area with families sitting and relaxing before or after their soaking in the healing waters of the onsen. I was greeted in Japanese by the staff to which I replied “wakatimasen” (I do not understand). I was then given a robe (Yukata) and a pictorial book of where I am to go and onsen etiquette. It was a great help. You do not need to be fluent in Japanese to enjoy Japan’s oldest onsen.

Standing by my station (you have an area on the floor designated for yourself or your party) lies a tray to hold my clothing. To undress I placed the robe they provide you over my clothing, then undressed. Yes, there are women and children around but it is quite normal as long as you conduct yourself with proper etiquette. Once undressed, you must fold and place your clothing in a neat pile inside your tray.

I then walked to the onsen area adjacent to the dressing room. Keep in mind that Dogo Onsen is in an old wooden building. The walkways are narrow and I had to descend stairs to access the dressing areas and public baths. It is creaky, funky and a fun experience.

Walking down to the men’s public bath, there was a place to place my robe and undress. The onsen is behind a closed door to keep drafts from interrupting the bathing experience. I took the robe off then entered the bath. There are stools outside the onsen itself with hoses and water faucets. It's there you sit and wash yourself before entering the bath. This is Japanese bath procedure;

My first thought before I entered the water was “how hot can it be?” Well, Dogo Onsen is hot, very hot. Not scalding hot but definitely hot. I kidded my wife about the pictures you see of Japanese sitting in an onsen with a folded towel on their head. My wife said that the Japanese do not do that. Well, they do. I did see a Japanese visitor to the onsen with a folded towel on top of their head sitting in the hot spring.

The water is hot but it is silky smooth. It’s like sitting in a large stone bowl. There's a deep end and a shallow end. The bath is public so you're not alone. It's not polite to stare, but you can acknowledge another person if you want or not. The Japanese are always polite. The important thing is to enjoy the onsen experience. If the water is too hot, you can climb out, sit on the edge, cool off and enter it again.

After leaving the bath, I exit the onsen and use the towel provided to dry myself off. I then put the yukata on and return to the dressing area. The dressing area is open to the outside. There are doors that open and visitors can walk around the balcony and sigh- see or just relax with friends. Greeting me on my return was Japanese green tea and osembi (Japanese rice crackers). It is nice to sit and sip tea and contemplate the hot spring waters (and cool off).

After the tea and snack, I dress in the same fashion as undressing. Japanese children have a great time at this onsen and many families come there to soak in the hot waters. When I was on my way out, I was greeted by one of the staff who spoke English. I was asked if I was interested in having a tour of the onsen. Of course I said yes.

I was given a bit of history of the onsen. It is said that according to legend, Dogo Onsen was found during the age of the gods when a white heron put its injured leg into hot water gushing out from a crevice in some rocks and found its leg healed as a result. According to another legend, one god put another ailing god into the hot spring and the god recovered. That is the legend of “Tama-no-ishi” (a round rock).

The onsen was visited by many famous novelists and among them is Natsume Soseki, one of the most famous novelists of the Meiji era. Soseki has a room dedicated to him at the hot spring and wrote about the main building of Dogo Onsen in his novel “Botchan.”

The building itself features shrines around the exterior. On the roof, on top of the drum tower, is a statue of the legendary white heron. The creaky wooden structure was built in 1894 and is considered a property of cultural importance.

Dogo Onsen is unique in that it's the only hot spring in Japan with a special bath built for the Japanese Imperial Family. This was constructed in 1899 and there's a private entrance for the royal family behind the main entrance on the opposite side of the building. I was given a tour and shown where Emperor Hirohito would sit and relax after the bath. The royal family has their own onsen, but currently it's roped off and drained of water. It's a time capsule and a walk back in Japanese history. Emperor Hirohito was the last of the royal family to visit the hot spring.

After leaving the onsen, it's nice to walk around the area and enjoy the local shops or go back to your hotel and relax.

Notes: How to wear a yukata. A yukata is a kind of Japanese kimono but less formal. It's a Japanese style robe. When putting on the yukata, center it in the front by holding each sleeve with your arms outstretched. Then hold both lapels and put the right lapel across your body first and the left one over that. Don’t put it on too tight. The belt should be tightened on the waist for women and on the hip bone for men. Tighten the belt, but not too tight. 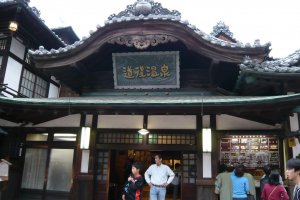 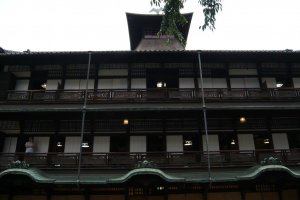 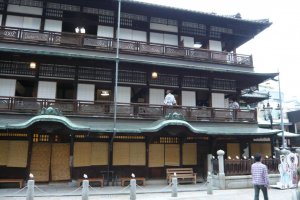 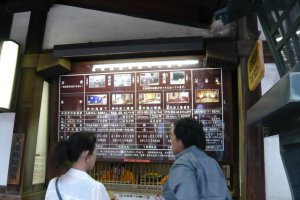 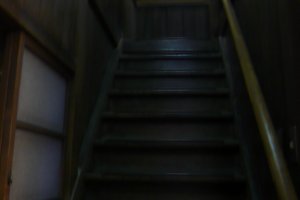 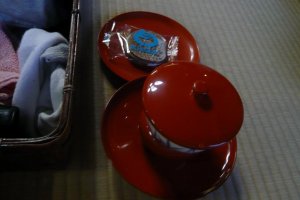