Each year during Japan's rainy season, Fukushima's Jupia Land Hirata is home to an impressive hydrangea festival which also coincides with a variety of colorful lilies in bloom. There are a number of paved walking paths through the grounds where visitors can appreciate the blooms up close.

As is the case for any flower festival, the dates can fluctuate slightly from year to year depending on blooming conditions. Based on last year's event, plan for the first few weeks of July - but do check the official website for updates closer to the season.

Jupia Land Hirata is located around 10 minutes drive from the Hirata IC on the Abukuma Kogen toll road. On-site parking is available.

For those using public transport, the venue is around 20 minutes by taxi from either Ononiimachi or Natsui Station, served by the Ban'etsu East Line. 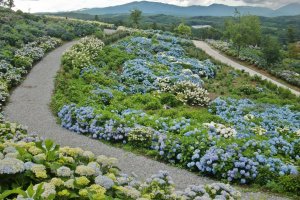