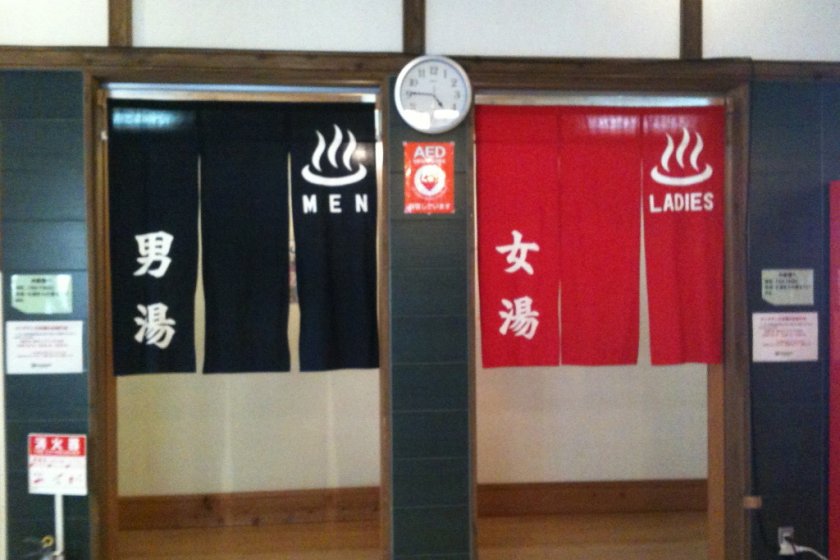 A day onsen on the road to Hida

Many onsen are often found in major hotels but there are some that operate just during the day for travelers, business people, truck drivers and locals. After a long exhausting day, I needed to let go so I headed to Kuraya Onsen, locally known as Onpoi No Yu to shower, relax and heat my body before heading to bed.

The nickname, Onpoi No Yu stems from a local song, Onpoi, while Yu means hot water (“no” is a possessive article in Japanese.) With plenty of parking and located just off route 257 just before the climb over the pass into Kashimo, it is very convenient.

Entering, I removed my shoes and put them in a free keyed shoe locker. Then had to buy a ticket from a vending machine. Though there were staff at a desk no more than 2 meters away, I paid my 600 yen at a vending machine, received a ticket which I then gave to the staff. Why the middle machine? Don’t know but just one of those things that makes you go “hmmm” in Japan.

There are two onsen rooms, one for men and one for women. On the first and fifteenth of the month, the rooms are swapped so that regular visitors can enjoy a slightly different experience and view. Today I was going to use the left side room. Lockers require 100 yen but the money returns when you leave.

I had brought my own towels which is more common for day onsens. Visitors can purchase towels for a fee if you do not have one. I brought two towels. One for washing and one for drying upon getting out.

The major rule about bathing in Japan is that you clean yourself outside the bath before getting in. Cleanliness is very big in Japan so if someone gets in without cleaning, they get looks. That said, if you have not done anything strenuous or don’t feel dirty and want to heat up before cleaning, just rinse yourself. I went into one of the cubbies and cleaned. There were four baths inside and two outside. I chose to go to the big bath first. I slowly slid in and went to the deepest part. Dipping down so the water was up to my neck, I let the day drain away into the silky warmness. After about 10 minutes, I decided to try the rotenburo or outdoor baths which are build of local Hinoki (Japanese cypress). Though the water was the same, it felt different as the wood gave off its own natural oils. One rotenburo was a large two leveled rectangle broken into two squares while the other was a individually sized hinoki bath. Though cold outside, the water was about 42ºC. The clouds danced between the surrounding mountains which mark the entrance to Tsukechi Gorge further taking the stresses of the day away.

My last stop was the sauna. I have never been a big sauna person but since I was there, I would try it out. In my personal experience, saunas are places for discussion or personal reflection. But this sauna had a television running the news which was nice but made it a little difficult to fully relax. After about 10 minutes I left and tried “the cold bath”. If I were Finnish, I would have jumped right in, but I am not so I splashed some water on me, “hoooo” and decided to warm up again in the big bath for a few more minutes.

Besides baths, Kuraya Onsen has massage chairs, food and drink vending machines, a small gift shop and a little cafe serving ramen, udon and a few other small dishes.

If I were traveling around the Tono region of Gifu or had spent the day hiking Tsukechi Gorge, Kuraya is where I would go to just let the day drain off. 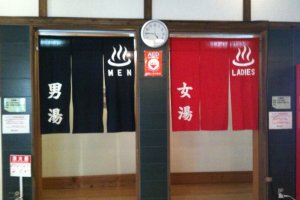 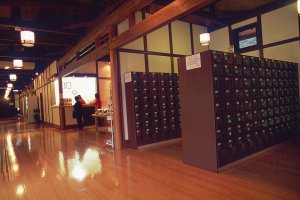 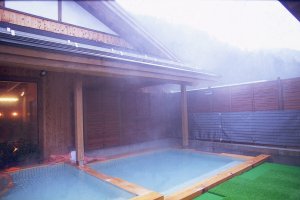 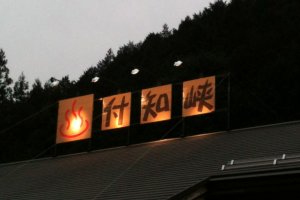 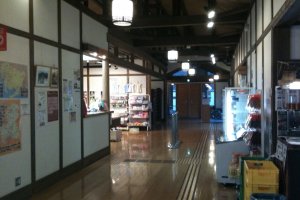