Takayama’s aesthetic excellence in one place

For a small town, Takayama is famed for a multitude of things. Its annual spring and autumn festivals are part of UNESCO's intangible cultural list, its Hida beef is some of the best red meat in the county, and its sake breweries are equally adored and sought after. However, most of all though, Takayama is known for the beautiful crafts it creates, and the equally beautiful buildings these can be purchased in. For the traveler to Takayama who wants to explore this agglomeration of aesthetic excellence, make sure to stop by Kusakabe Mingei-kan (Kusakabe Heritage House) and folk collection, where inside Takayama’s high-design can be found condensed.

The entrance to Kusakabe Mingei-kan is a reflection of everything you will find inside: traditionally constructed, with a modest yet clean design, and a cool sense of calm about it. For its prototypically Meiji-era architecture, the structure was designated a National Important Cultural Property in 1966. Going straight round to the rear courtyard, you will be offered a warming cup of complimentary green tea by the friendly staff. I thoroughly recommend you sit down, sip your tea, and take in more of the exterior from here, before heading into the meat of this quiet building. The interior itself is clam and spacious, and you’d be unlucky to find it overrun with visitors on a standard day. The items on display are also well-selected to provide a solid yet not overwhelming idea of Takayama’s folk craft heritage.

Part of the appeal of the Kusakabe Mingei-kan is the fact it belonged to common people. The Kusakabe family were merchants — albeit successful ones — who had the present building constructed in 1879 after their previous store burned down four years prior. As a result of this, a visit here can be appreciated not only for the direct insight it gives on Takayama’s general design tradition, but also insdrectly into the lifestyle of the town’s middle-class in the later nineteenth century.

Coming out of Kusakabe Mingei-kan, you'll be sure to have an understanding of the famed craftsmanship of Takayama and the lives of its middle-class. 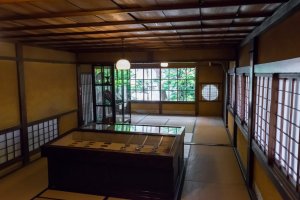 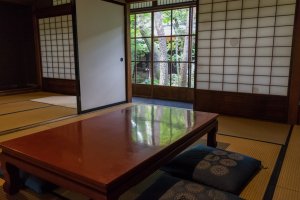 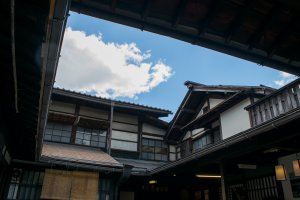