A thousand years of history

A most impressive niomon entrance gate sets the scene for the underrated Koanji Temple. Full of history with its one thousand years of heritage, the temple was intimately connected with the powerful Ashikaga samurai family. Now home to a collection of jizo statues, the temple also features an old well known as the Benkei Inkstone Well.

A 5-minute walk from Bubaigawara Station on the Keio or JR Nambu lines.

Myokoin Temple presents a striking image with its red niomon gate and attending warrior guardian statues. Said to have been established in the mid-9th century, the temple's 25m-tall gingko tree was selected by the city as one of its top 100 while the bamboo groves, stone statues and landscaped grounds all combine in a pleasant way.

A 3-minute walk from Fuchuhommachi Station on the JR Musahshino or Nambu lines.

Said to have been founded almost 2000 years ago, Okunitama Shrine is one of Tokyo's top five major shrines and oozes history and heritage. Host to the springtime Kurayami Matsuri darkness festival, one of the oldest in Tokyo, and the Chestnut Festival in autumn, the magnificent architecture - along with a sumo ring - is a standout feature.

Its sanmon gate may have been the inspiration for the one in the Akira Kurosawa film, Rashomon, but Togo-ji Temple also turns out to be one of the best places in Tokyo to witness the weeping cherry blossoms in spring. Once you enter the temple grounds, the space seems endless, a perfect antidote the business of brand name central Tokyo.

A 4-minute walk from Tama-reien Station on the Keio Line. 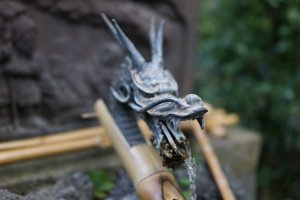