An amazing array of waterfront sights

An amazing array of spectacular sights make Koto City Ward one of the most surprisingly enjoyable areas of Tokyo to visit. Water views, giant robots and some out-of-this-world feats of engineering give the city a great personality. Here is an introduction to just some of the landmarks of Koto and how to reach them.

Tokyo Big Sight is a marvel of contemporary architecture and design. A convention centre by trade, it is the largest such centre in the entire country and the building's four inverted elevated pyramid structure is one pretty impressive sight. Plenty of sightseeing and eating to be had along the waterfront here.

A 2-minute walk from Tokyo Big Sight Station on the Yurikamome Line.

Some spectacular views are available to anyone visiting Tokyo Gate Bridge. Crossing Tokyo Bay, this 2.6km impressive feat of engineering has been nicknamed the 'Dinosaur Bridge' and took ten years to complete. From a height of over 80m, ocean ship views as well as those of the planes. try the night illumination version for a real treat.

A 10-minute no.11 bus ride from Shinkiba Station on the Yurakucho, RInkai or JR Keiyo lines. Alight at the Wakasu Camping Park-mae bus stop.

The world's most famous wholesale seafood market has been in business-as-usual mode ever since its relocation to Toyosu. A made-to-order spot, the Toyosu Fish Market combines dedicated service to its fishmongers with some incredibly delicious seafood cuisine. The new tuna auction location even has its own dedicated viewing deck.

Standing at just under 20m in height, the massively impressive Unicorn Gundam Statue in Odaiba surely is a standout feature of the this popular waterfront district. The statue goes through four transformations from Unicorn mode to Destroyer mode each day while the evening light show is spot on spectacular. 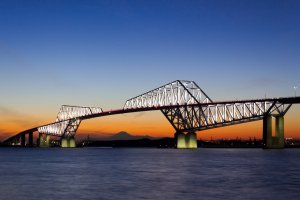 Elena Lisina 3 weeks ago
I love Odaiba! There are so many things to enjoy!
Reply Show all 2 replies

Sleiman Azizi Author 3 weeks ago
I always think of you when it comes to Odaiba. Probably your favourite place after Sendai? lol
Reply

Elena Lisina 3 weeks ago
Yes! )))
Reply
3 comments in total
Back to Contents