With its magnificent water views and strivings towards the future, there is no doubt that Koto City Ward is a city on the move. Its temples and shrines, influenced by centuries of history, carry their heritage forward with unique traditions and innovations. Here is an introduction to just a few of the many temples and shrines in Koto and how to reach them.

One for the new millennia, the neighbourhod temple that is Fukagawa Fudo-do Temple features some truly eye-opening modern design features. Home to a traditional goma fire ritual, the temple's 9500 crystal Fudo-myo statues that make up the prayer corridor is a sight for anyone's eyes.

A 2-minute walk from Monzen-Nakacho Station on the Tozai Line.

With a history said to date all the way back to the mid-7th century, Kameido Katori Shrine is certainly not short of heritage. The annual Kachiya Festival festival in May is held here to commemorate victory against the 'New Emperor' in the 10th century while the shrine's katsuishi victory stone attracts its own share of attention.

A 9-minute walk from Kameido Station on the either the JR Chuo-Sobu or the Tobu Kameido lines.

Beautiful ponds traversed by a pair of classically designed arching bridges and stone lanterns are just two of the many traditional design elements on display at Kameido Tenjin Shrine. A wisteria festival held each year during late April-early May along with the samurai helmet-like design of its main structure are also impressive features here.

From equestrian statues and golden roosters to sumo history and flea markets, Tomioka Hachimangu Shrine almost overflows with interest. The moment you enter the grounds, Tokyo's largest Hachiman shrine stands out with its striking colouring and having been established in the early 17th century, culture and heritage.

A 2-minute walk from Monzen-Nakacho Station on the Tozai Line. 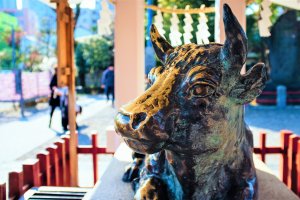