A jumble of pure residential back streets and alleys, Nakano City Ward is a treasure trove of local Tokyo. With its small-time mom & pop operations, independent ambience and down to earth escapism, the city is home to scores of curious experiences. Here is an introduction to some of the landmarks and historical spots of Nakano and how to reach them.

A dark tourism candidate, the Former Nakano Prison had run since 1915 before being decommissioned in 1983. With most of the complex demolished, the remaining entrance gate is all that is left of a prison that was once notoriously used to contain political prisoners during the country's dark days of military rule.

An 8-minute walk from Numabukuro Station on the Seibu Shinjuku Line.

A philosopher, Buddhist reformer, and teacher in the Meiji Period, Inoue Enryo founded Toyo University and Japan's first ever Society of Philosophy. This modern renaissance man also found the time to publish journals, books as well as acting as a lecture tour speaker. The Grave of Inoue Enryo is a site of respect for this remarkable man.

A 14-minute walk from Araiyakushi-mae Station on the Seibu Shinjuku Line.

Nicknamed the 'Dog Shogun', Tsunayoshi was inspired by his religious beliefs to protect animals during his reign as the 5th Tokugawa shogun. Particularly fond of dogs, Tsunayoshi released numerous edicts - with harsh penalties - for their protection. The Kakoi Statues with their five shiba dogs are a cute memorial to the curious days of his rule.

A 4-minute walk from Nakano Station on either of the Tozai or JR Chuo lines.

The city's most famous shopping complex, Nakano Broadway draws in fans of the manga and anime world from everywhere. Sometimes seen as the friendly answer to the more famous Akihabara Electric Town, the centre's cosy size underscores its highly animated character and personality.

A 3-minute walk from Nakano Station on the JR Chuo Line. 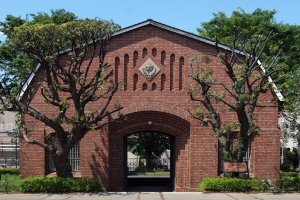 Sander van Werkhoven a year ago
I went all the way to Abashiri for the Prison Museum, I could have just gone to Nakano :-)

Nakano Broadway is fun though, I might even prefer it over Akihabara.
Reply Show all 1 replies

Sleiman Azizi Author a year ago
As long as you are on the outside!
Reply

Elena Lisina a year ago
When I stayed in Higashi-Koganei, always passed Nakano, but never made a stop there. Nakano broadway sounds good! ;)
Reply Show all 1 replies

Sleiman Azizi Author a year ago
I think you'd like it.
Reply
4 comments in total
Back to Contents