Birthplace of the anime industry, family-friendly Nerima City Ward is also home to a fantastic views over Tokyo, a heritage of white radishes and even ancient castle ruins. Here is an introduction to some of the landmarks and historical spots of Nerima and how to reach them.

From the 20th floor of the Nerima City Office Observatory are five observation areas with a 360 degree view of the surrounding city. On clear days, Mt. Fuji is visible while some of the more renowned buildings in areas like Shinjuku, Yokohama and Sumida can also be seen. Best of all, the observation deck is free.

A 5-minute walk from Nerima Station on any of the Toei Oedo, Seibu Ikebukuro or Seibu Yurakucho lines.

Edo history almost ran on the daikon radishes and the volcanic soil of Nerima turned out to be one of the best areas to grow them. Regularly growing to over one metre in length, the city's famous radish heritage is celebrated with the Nerima White Radish Monument set up in honour of the famous root.

A 2-minute walk from Nerima-kasugacho Station on the Toei Oedo Line.

A relatively recent addition to the city, the Oizumi Anime Gate is a symbol of the city's anime culture and heritage. Many popular anime characters that originated in the city can be found here as life-sized bronze statues. The site also features a chronology wall detailing the history of anime as well as the chance to watch some too.

A 1-minute walk from Oizumi-gakuen Station on the Seibu Ikebukuro Line.

Shakujii Castle was built in the 14th century by the Toshima clan and unfortunately signaled the beginning of the end of the clan. Located in Shakujii Park, the castle ruins are open to the public on Culture Day while the related Teruhime Festival, in honour of the last princess of the clan who leapt to her death in sorrow, is held in spring.

A 15-minute walk from Shakujii-koen Station on the Seibu Ikebukuro Line. 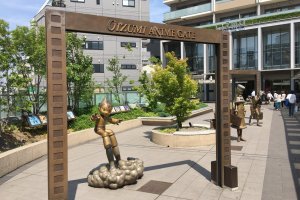 Kim 2 weeks ago
These guides are a great reminder that there's something interesting to appreciate in every part of the city!
Reply Show all 0 replies

Elena Lisina 2 weeks ago
Anime gates is of my interest, thank you, Sleiman! I can imagine Daikon monument as have seen Wasabi monument in Nagano Prefecture! :)
Reply Show all 1 replies

Sleiman Azizi Author 2 weeks ago
The monument is pretty basic but it's the heritage behind it that makes it interesting.
Reply
3 comments in total
Back to Contents