Appreciate the color of these early summer blooms

Niigata is perhaps best known for its myriad of fantastic ski resorts during winter, but there is plenty to enjoy during other times of the year as well. The rainy season brings with it the color of hydrangeas (known as ajisai in Japanese), and you'll find some brilliant spots to appreciate them across the region. Best of all, you can often still see them in bloom right through until the middle of July, which is a little longer than the Tokyo area.

If there ain't no mountain high enough to keep you from getting your ajisai fix, Gomadoyama is simply gorgeous - and it's really not all that high, either. Standing at just over 270 meters, the mountain is home to around 30,000 hydrangeas in various types. In typical years there's a festival held here to celebrate their beauty, but even without the festival you'll still find an amazing number of flowers and some impressive views over the local area.

Though it's a little out of the way and best accessed via private vehicle, the Tokamachi Ajisai Park is a real gem for hydrangea fans. The park has paths that weave up and down the hillside, allowing you to stroll around at your leisure and soak up the flowers in all their glory. It's free to enter, and there is also plenty of free parking on-site.

Kannonyama Park is home to around 5000 hydrangea plants, filling the grounds with shades of purple, blue, pink, and white from around mid-June to mid-July. Along with the beautiful flowers to enjoy, the park gives off some spectacular views out over the surrounding area, including glimpses of Mount Sumon, Mount Agawa, and Mitsuke City.

If you're in the area during sakura season, be sure to stop by the park and enjoy the cherry blossoms, too. There are rows of trees in several different varieties, including the Somei Yoshino and Yaezakura (double sakura) types. 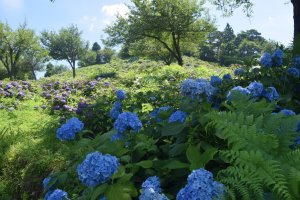 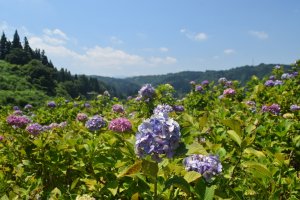 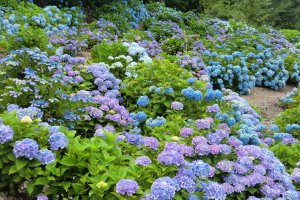 Elena Lisina a month ago
Ajisai looks gorgeous! Kim, what kind of weather is in Niigata in the end of June?
Reply Show all 3 replies

Kim Author a month ago
Rainy and humid, typically! Of course, not every day is rainy, but I would consider that when planning outdoorsy activities!
Reply

Elena Lisina a month ago
Thank you, Kim! I like rainy weather as there are no crowds! :)
Reply

Kim Author a month ago
I enjoy it for that reason myself! :)
Reply
4 comments in total
Back to Contents