A taste of some of the local foods of Gifu

Landlocked Gifu prefecture has historically relied on its mountains for its culinary traditions. The indigenous hoba magnolia leaf, with its fragrance and anti-bacterial properties works alongside the ever-popular miso to create both agrarian and home-cooked flavour combinations. Nationally recognised beef is also raised in Gifu while chestnuts feature in the prefecture's confectionery. Here is a simple guide to some of the regional cuisine of Gifu.

Probably Gifu's most famous modern traditional food, Hida beef is one of Japan's top beef brands. Intensely marbled meat with an almost snowflake look to it, this meat is slightly sweet in taste with a trademark melt-in-your-mouth texture. Hida beef is popularly eaten as shabu-shabu, sukiyaki and as a steak.

One of Japan's most local of local dishes, the hoba miso of Gifu sees mountain vegetables grilled with miso paste on a top of a dried magnolia leaf. Bereft of other foods to eat during Gifu's harsh winters, hoba miso was originally fare for desperate mountain farmers. These days, the dish has been elevated to the point where it is now eaten with toppings like beef and sea urchin.

A kind of Gifu stir-fry dish, keichan chicken sees marinated chicken with cabbage fried in what is usually a base of miso sauce. Originating in the homes of Gifu, keichan chicken is also served fried in soy sauce or garlic. Whatever the base, the dish is a go-to one that never fails to satisfy.

Served as part of the nation's traditional New Year's osechi meal, kurikinton is mix of chestnuts and sweet potatoes. However, in Gifu kurikinton became a sweet of peeled chestnuts candied in sugar. Not as sweet as it may first seem, kurikinton is also less sticky than the osechi version and as such, has become a very common and easy to eat treat. 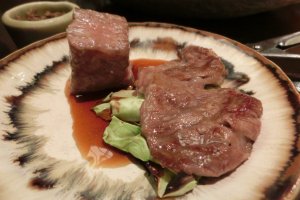 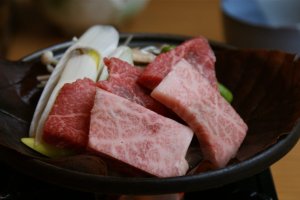 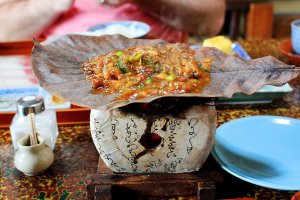 Sherilyn Siy 2 weeks ago
Keichan chicken looks like something we could make at home. Should research the recipe!
Reply Show all 0 replies

Sander van Werkhoven 3 weeks ago
Because of a little accident, I was stuck in Takayama for a week. Could have been worse, as there is a lot to see and to eat! Quite a bit of Hida beef obviously, though I still wonder if it really makes a difference in yakisoba or a nikuman.... But just the meat with some hoba miso.....

Probably the most famous food of Gifu prefecture however is inedible. Literally. Gujo-Hachiman is famous for its food replicas :-)
Reply Show all 1 replies

Sleiman Azizi Author 3 weeks ago
Inedible food... I know some people who are good at that, lol.
Reply

Kim B 3 weeks ago
We went to a place in Takayama which had Hida Beef burgers...amazing. The kind of place that you have to queue up for.

Someone else wrote an article about it here: https://en.japantravel.com/gifu/my-first-trip-of-many-to-center-4-hamburger/3709 -- highly recommend it!
Reply Show all 2 replies

Kim B 3 weeks ago
I still dream of the place!
Reply
6 comments in total
Back to Contents