Down to earth downtown Tokyo

Home to the quintessential downtown atmosphere, Sumida City Ward is an old-school haven of history and heritage. The famous Sumida River is central to many of the local sites while the venerable sport of sumo also finds its home in the city. Here is an introduction to some of the landmarks and historical spots of Sumida and how to reach the

The giant Golden Flame of the Asahi Beer Building is one of the most curious of sights greeting visitors to the city. Built to celebrate the company's 100-year anniversary in 1989, the surrounding Sumida River offers plenty of chances to view this most famous of icons. For a close up view, take the popular Azumabashi Bridge to the building.

With the famous Sumida River flowing through it, the city is not short on bridges. One of the more historical ones is Komagata Bridge built in 1927. This rainbow arched bridge allows pedestrian traffic and features a side alcove that offers excellent views of the river and surrounding iconic landmarks.

A 2-minute walk from Asakusa Station on any of the Tobu Skytree, Ginza or Toei Asakusa lines.

Any fan of sumo will jump at the chance to visit the home of the sport at the Ryogoku Kokugikan. About as authentic a Japanese experience as you can get, the stadium stages three of the six professional bouts held throughout the year. It also features a small sumo museum while the tournaments are simply a blast of atmosphere.

A 2-minute walk from Ryogoku Station on the JR Sobu Line.

Japan's tallest building and one of the tallest in the world, Tokyo Skytree stands at a whopping 634m making it the most recognisable feature in Tokyo. Loaded with shopping and dining opportunities at its Solamachi annex as well observation decks with jaw-dropping views, the tower has become a must-visit location. 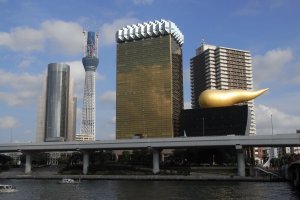 Kim a year ago
I always laugh at the golden flame's nickname... 😂😂
Reply Show all 1 replies

Sleiman Azizi Author a year ago
It's one of your favourite places, isn't it?
Reply

Elena Lisina a year ago
Yes! I love water - river or sea or ocean, but at home we have none of that. Only woods, endless woods... :)
Sleiman, I can't write on FB - for some reason that option is blocked for me. Can't fix it. :(
Reply
5 comments in total
Back to Contents