Enjoy vibrant yellow trees at these spots across the city

One of the highlights during autumn in Japan are the ginkgo trees that turn their trademark vibrant yellow. Tokyo is blessed with a number of great destinations to appreciate their beauty, and this guide covers seven of them.

Meiji Jingu Gaien's ginkgo tree lined avenue is often regarded as one of the best spots to enjoy autumn in all of Japan, and the Jingu Gaien Ginkgo Festival has been celebrated annually here since 1997. Typically, the best time to catch the trees in all their yellow glory here is from the mid November to early December timeframe.

Show Kinen Park has a wealth of beauty to enjoy no matter the season in which you visit, and the autumn months are packed with color in the form of both flowers and trees. The park's Ginkgo Avenue is undoubtedly the showstopper, with trees lining the walkway for around 200 meters.

Nerima's Hikarigaoka Park is a popular destination for sakura fans during spring, as it's home to around a thousand cherry trees that turn a pretty pastel pink. During autumn, however, be sure to check out the forty giant gingko trees that line the path connecting Hikarigaoka Station to the park. One of the most impressive things about the ginkgo trees here is that they're all over 130 years old!

Head out to Hachioji to explore Koshu Kaido Avenue, a stretch of road leading to Mount Takao which is lined with over 700 ginkgo trees. An annual festival takes place along the route during the mid-November timeframe, which also includes food stalls, regional products for sale, and even a classic car parade.

The University of Tokyo

The University of Tokyo's ginkgo-lined avenue dates back to 1906, and it was created with trees transplanted from the Koishikawa Botanical Garden. During that period it was rare to see ginkgo trees used for landscaping, so many may say that the university was the inspiration behind other ginkgo avenues in the city.

Another outdoor destination in the city that proves popular year-round, Yoyogi Park is home to over 250 ginkgo trees, along with around 1000 zelkova trees. For those who can't visit during autumn, the park is extremely popular for cherry blossom picnics during the spring season.

Another destination to enjoy yellow ginkgos in autumn is along the approach to Yasukuni Shrine. The impressive trees here stand around 25 meters in height, and add an imposing elegance to the walkway. Yasukuni is another destination which proves popular in spring, thanks to its abundance of sakura trees. 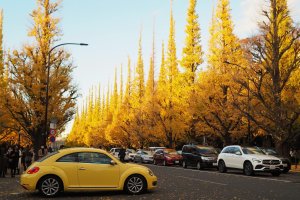 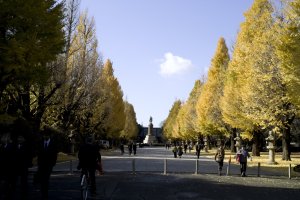 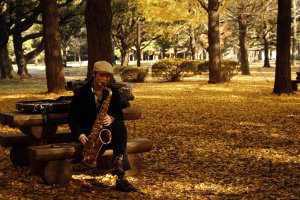 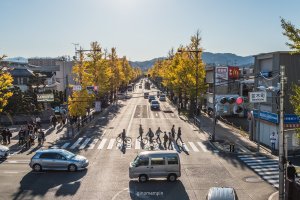 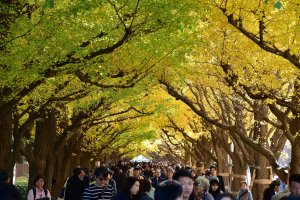 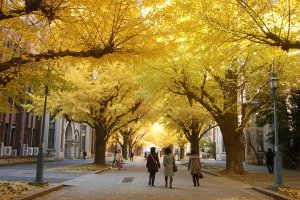