From Kuniyoshi to Yoshitoshi

A ukiyo-e exhibition at the Takasaki Tower Museum of Art

A special exhibition at the Takasaki Tower Museum of Art looks at the works of Kuniyoshi Utagawa (1798 - 1861), who gained popularity for his paintings of samurai battles, and his apprentice Yoshitoshi Tsukioka (1839 - 1892), who was often regarded as the last great ukiyo-e master. Approximately 150 works in total will be displayed at the event, including pieces borrowed from the Nagoya City Museum who are known for their extensive ukiyo-e collection.

Adult admission to the event is priced at 600 yen, and no advance reservations are required.

The Takasaki Tower Museum of Art is located just two minutes on foot from the east exit of JR Takasaki Station, served by numerous lines including the Jōetsu Shinkansen, the Hokuriku Shinkansen, and the Takasaki Line.

For those who plan to drive, there is no dedicated parking lot for the museum, however there seven paid lots in the local area that the museum recommends, including the LABI1 Takasaki Parking Lot (2 minutes away on foot), or the Takasaki Station East Exit Parking Lot (3 minutes away on foot). If you park at the lots recommended by the museum, bring your ticket to the reception desk and they will validate it for an hour of free parking. 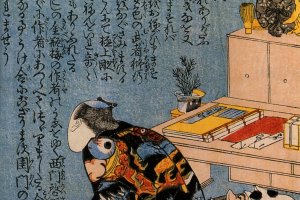 From Kuniyoshi to Yoshitoshi

Sleiman Azizi a month ago
Ukiyo-e done right is an art that grows on you.
Reply Show all 0 replies
1 comment in total