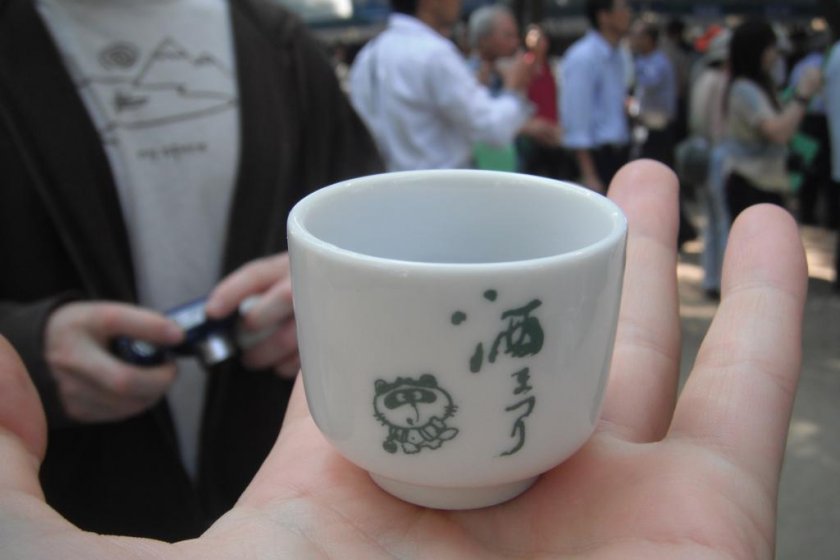 A chance to sample over 900 sakes from around Japan

Saijo is famous for Japanese Sake. It is a small town in the city of Higashi-Hiroshima, half an hour from Hiroshima City Station, that has a well-known sake brewing tradition and is home to no less than 10 breweries.

The annual Saijo Sake Festival event is held in early October, on the Saturday and Sunday preceding Japan's Health and Sports Day each year. The event attracts between 100,000 to 200,000 people into the town for the two days that it runs. For those two days, the town bustles with energy and atmosphere. There is live music, parades, brewery tours, and, of course, sake samplings. In "Sake Square" (Chuo Park West) lovers of this traditional Japanese alcohol can try many wonderful varieties here as there are over 900 types of sake on offer.

On opening day, the festival commences with great flair as the Osaka-bayashi, the symbol of sake breweries, is paraded from Matsuo shrine to the main venue and enshrined above the main stage for the duration of the festival. Other parades are made up of local school children marching while beating drums through the streets, or one is composed entirely of women carrying a shrine; these provide interesting street-side entertainment.

Chou Park East provides free entertainment for the weekend and festival goers can wander the stalls or watch some free concerts on the main stage. If you choose to take the tours of the breweries you will be treated to sake making lectures and discussions, sake tastings, and some breweries even hold concerts within their main buildings as well as games and events for kids.

For fans of karaoke, there are some singing contests located in different parts of the town and for those with a penchant for Japanese food 8,400 yen will secure a table for you and three others to try Bishu-nabe, a local dish of stew which is seasoned only with sake, pepper, and salt so as not to affect the brewers' taste buds.

One of the most popular events of the festival is Sake Square, entry to which will cost you 1,800 yen at the entrance. On entry, you are handed a small souvenir sake cup and a list of all the sake types and brands available inside. The entrance fee covers all of your sake for the day, although some of the drinks like the sake cocktails or beer will cost you a little extra.

On the festival grounds if you want food from a vendor you must first trade your yen for tickets at a separate tent (which are non-refundable and can only be used to buy food inside). Once you enter, you may not re-enter, so if you plan to come for the day it is advisable to bring some food and definitely water. The rules state that outside food isn't allowed but as no one seemed to pay attention to, or enforce this rule, so neither did we. The rules also say you can't reserve space inside, but again we saw many festival-goers with tarps and portable seats reserving space, so we picked a spot under a tree and made it our own.

The sake tents are divided by region and the choice is simply staggering. The sake themselves are each assigned a letter and number. Lists of letters/number combinations are stapled to the front of the tents to let you know which are still available. Not having much knowledge of sake we simply chose at first by sweet or dry and after that by the numbers that our birthdays fell on, or by label, or in the end- completely at random.

The atmosphere inside was fun and rather exciting. There was no trouble and surprisingly few people had overdone it. That's not to say that we didn't spot a few people sleeping off their sake on the grass, or being helped toward the first-aid tent, but people, on the whole, were so sensible and well behaved that it just made the day feel that much more mellow and enjoyable. A festival I would highly recommend and definitely return to given the chance.

The idea proposed by the executive committee is geared towards collecting local sake from sake breweries all over Japan that can cooperate with them at the online sake festival, deliver it to Japanese sake fans all over the country from Higashi-Hiroshima City, connect with people all over Japan with a smile, and enjoy Japanese sake. 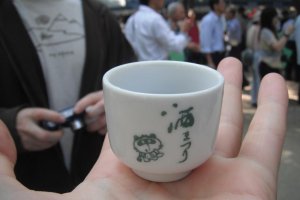 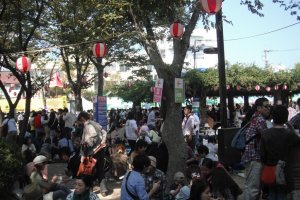 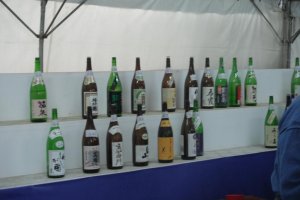 For the festival's 30th anniversary in 2020, the event is planned to be held primarily online – stay tuned to the official website for more details.