Shukkei-en, located right in the middle of Hiroshima city, doesn’t make the lists of Japan’s top gardens and although its impact has been somewhat diminished by the high-rises that now overlook it, the garden still makes for a very pleasant place to escape from the bustle of the city, at any time of the year.

The original garden was commissioned in 1620 by the newly appointed ruler of Aki province (as the Hiroshima region was then known), Asano Nagakira. He gave his senior retainer, respected warrior and renowned tea master, the task of designing it. Ueda created what is known as a “circular tour style garden”, that had become de rigueur among daimyo by the 1600s.

The name “Shukkei-en” literally means “shrink-scenery garden”, and to make the garden seem much larger than its actual size, it is rich in variety; filled with elements that represent mountains, valleys, rivers, lakes and islets. Ueda also incorporated the mountains that surround the city as a kind of grand backdrop to his design. In fact, he went as far as having a pine tree planted on the summit of the mountain on which Mitaki Temple is located to enhance the view from three of his teahouses; The mountain is known locally as Mitaki-yama, but is also known as Soko-yama after the tea master.

Shukkei-en was first opened to the public in 1940. Although almost completely destroyed in the atomic bombing, it has been lovingly restored. For a small charge members of the public can take part in seasonal tea ceremonies held in tea houses in the garden. If the idea of a tea ceremony is a little intimidating, there is also the quaint Sensui-tei teashop, with lots of outdoor seating, where visitors can enjoy Japanese tea and sweets (coffee too) in a more relaxed setting. Shukkei-en also a very popular spot for wedding photographs, and there is a good chance visitors will see young couples dressed in traditional wedding attire.

The lake is filled with large koi carp and you can purchase carp feed from for ¥100 a bag.The sight of the impressive fish making and a beeline towards fresh feed being cast into the water, and the battle over the pellets that ensues is quite a sight and is sure to delight children.

Although it can get quite busy at weekends, especially when the plum or cherry trees are blossoming and the maples are turning red in the autumn, on most days you will find the place quiet and relaxing. Lovely on a nice day when you hang around for an hour or two strolling and watching the turtles sun themselves on rocks in the pond, it also a good place to visit on a rainy day when it takes on a completely different, but still delightful, character in the rain.

Find out more about Shukkeien Garden. 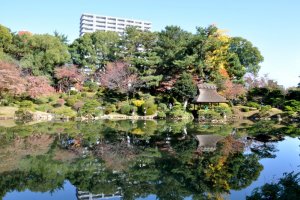 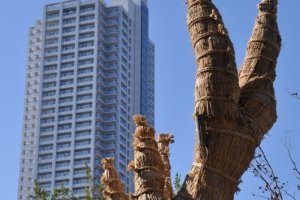 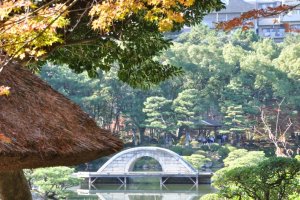 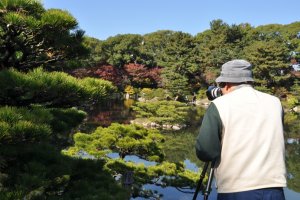 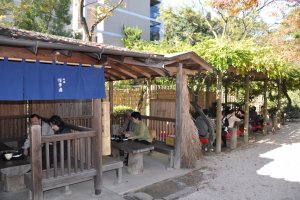 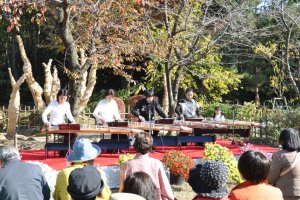 JapanTravel Guest 8 years ago
I have to admit I think it's a shame that high rise development around the garden hasn't been regulated. I sometimes feel that I'm in one of those courtyard gardens in a large hotel! Still, it is lovely. Right now, plum blossoms are in full bloom, and yes, cherry blossoms are just around the corner. The autumn colors are also gorgeous.
Reply Show all 0 replies

JapanTravel Guest 8 years ago
I love the way the Japanese can juxtapose urban clutter with zen-like tranquil and beautifully kept inner-city parks and gardens, like Shukkei-en. Never been to Shukkei-en, but the great photos tell all, especially the pond area. Must be really beautiful when the cherry blossoms are all out.
Reply Show all 0 replies
2 comments in total